Jack liked to know people’s names. They interested him. Names seemed to describe a person or at least it often seemed so. 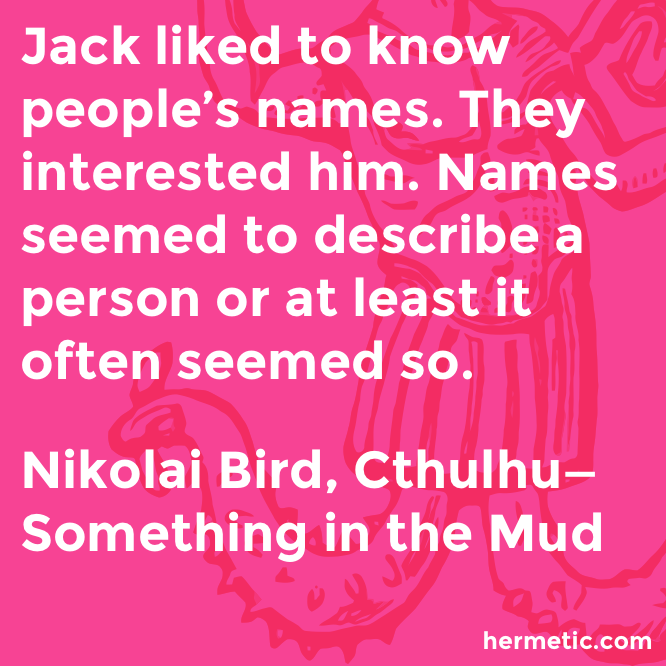 “Further, this correspondence would identify the Thrones with the names drawn from the Circumference and the seven Seals, the Archangels drawn from the Septagon would be the Trumpets and the planetary Angels about the pentagram would be the Angels. Compare Part I of this series where these divisions are laid out in detail.” [via, see]

“Although there are a number of hierarchies of spiritual beings in the Sigillum, there are only three sets of letters from which these names are drawn and from these three sets, three principle groups of angelic names, one for each set. The three sets of letters are those of the Circumference, the Septagon or Holy Sevenfold Table and the Isosceles triangles within the Septagon or Mysterious Sevenfold Table.” [via]

“In this – the first ever – episode of SittingNow TV, we present the first of four lectures from the ‘Summer of Love’ event put on by Scarlet Imprint back in August.

Ulysses Black is not a name known to the occult community, despite having generated, under different guises, considerable interest through much sought after publications and artwork. As Ulysses Black he assails the issue of identity through performance art and ritual action. From influences such as Joseph Beuys and Hermann Nitsch as well as the Western Magical Tradition he plots a return to mythical Ithaca.”

“The first episode showcases Ulysses Black grappling with the issues of identity, magickal names, performance art and authentic action.” [via]