Norman Weinstein offers an overview of the corpus of Hermetic Library Figure Thomas Taylor at Under the Sign of Hermes: The Thomas Taylor Bookshelf in the Caduceus archive. 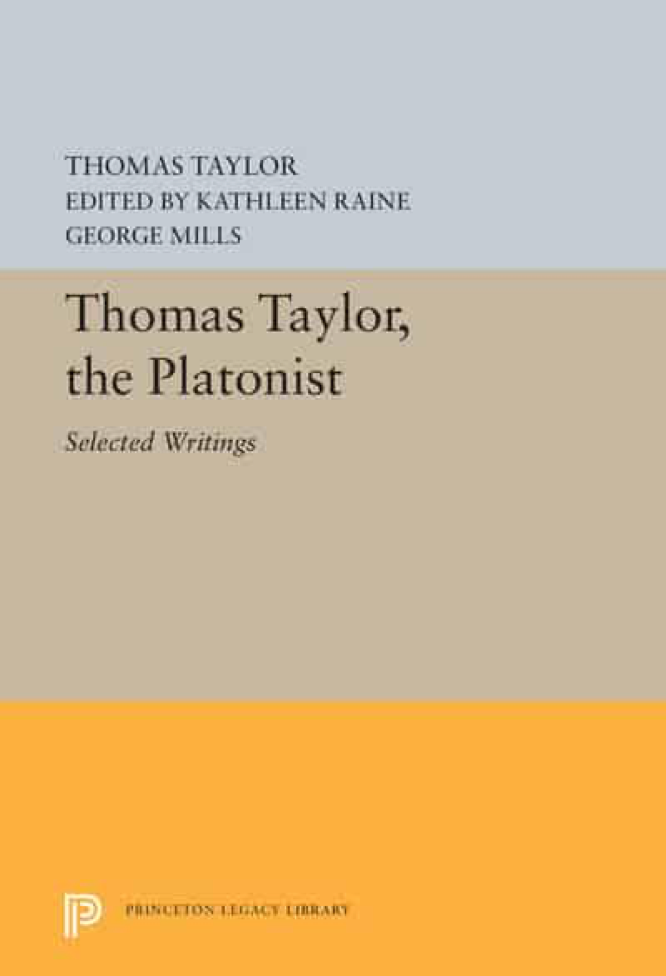 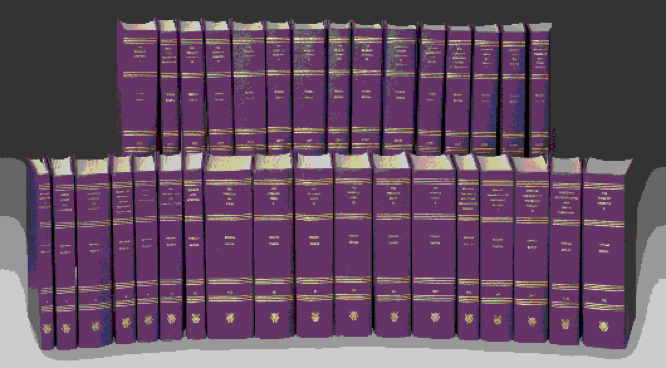 While a proliferating array of new publications dealing with the topics of soul and mythology continue to be issued by the major publishing houses, some of the most vital imaginative writing on these subjects emerges from small and obscure publishers. A case in point? Thomas Taylor, the most famous translator of Plato and Neoplatonic philosophers, an original philosopher and poet in the vein, has recently been the object of ambitious republication by small presses. The last publication of Taylor’s by a mainstream press was a superb selected writings, Thomas Taylor The Platonist, edited by Kathleen Raine and George Mills Harper for the Bollingen Series, published by Princeton University Press a quarter century ago. It has been out of print for years. Which raises the question: if Taylor is so central to discussions of soul and mythology, particularly Greco-Roman, why have his works languished in obscurity until now?

The answer has much to do with the nature of his role as translator. Translation was hardly financially rewarding or fully intellectually recognized during Taylor’s lifetime (1756–1835). It is arguable how more much it is appreciated today. Taylor came under attack from his fellow Englishmen for being philosophically out-of-step with various philosophical currents embracing scientific materialism on the one hand, orthodox Christianity on the other. And although Taylor’s books offered the sole English version of Plato available in the early nineteenth century, the educational conservatives of the time bemoaned the barbarism of a reading public unable to read Greek.

For the core group of major English romantic poets — Blake, Coleridge, Wordsworth, Keats, and Shelley — Taylor’s translations were the portal through which they caught their vision of Greco-Roman mythology. Few had the mastery of the Greek language which would have afforded them a direct reading of Plato and the Neoplatonists. Taylor’s influence traveled to the New World; his translations formed a crucial body of inspirational texts for the New England transcendentalists. Ralph Waldo Emerson and Bronson Alcott found in Taylor’s translations constant insights applicable to the birth of a new American idealism. Twentieth century poets like William Butler Yeats and Robert Duncan carried the impact of Taylor’s translations into our own time.

The specific nature of Taylor’s role as translator is the stuff of mythic tall tales. In the often extensive prefaces to his various translations, he described this job as a translator as “Herculean” and “Promethean.” Constant identifications with the trials of Ulysses were yet another self-promotion. But the mythic identification he never explicitly declared is the one that most often came to mind during my recent reading: he translated under the sign of Hermes. Remember that Hermes was the messenger of the gods, bring their wishes to the depths of the underworld. Hermes was Psychopompus, the guide to souls crossing into the underworld, becoming in time a generalized symbol for a guide for travelers and business folk. Constant travel between worlds, interpreted metaphorically, allegorically, can be associated with the ability to translate meanings of various experiences from one language to another. That is exactly what Taylor accomplished, translating the language of imagination (poetry and myth) into a language materialistically-oriented readers could grasp.

Like Joseph Campbell, Mircea Eliade, and Carl Jung in our century, Taylor “packaged” a vast body of mythic literature erroneously labeled “occult” and made it widely available. His books offer considerably more than translations. The copious prefaces and footnotes are a “framing,” at times even a form of advertising for the value of the tradition of Platonic philosophy as well as a polemic against Taylor’s philosophical opponents. Even his original writings, poems and essays, read oddly like translations from the ancient Greek or Latin. If H. G. Wells’ time machine had been real and available during Taylor’s lifetime, rest assured he would have happily returned to the time of the Platonic academy and never missed his London home.

To mediate between the ancient Greco-Roman world and the world of the British nineteenth century was a task that simultaneously brought out the best and worst in Taylor. The best involved the care with which he doggedly maintained a faithfulness to the original Greek texts. Ironically, his obsession with literal translation also resulted in many of his worst moments. Here is an example of Taylor translating The Craytlus of Plato. This is Socrates talking to a citizen interested in the relation of name to an object:

If you fail to come up with a response to the query as rapidly as Hermogenes, it could be because we moderns expect a concise style that quickly “cuts to the chase.” Taylor is verbose, with nearly a Victorian love of baroquely applied qualifying adjectives and clauses of a length approaching infinity. As Kathleen Raine writes, “Yeats called his (Taylor’s) style atrocious, and Coleridge wrote that Taylor translated Proculus from ‘difficult Greek into incomprehensible English.’” Yet as the representative sample above indicates, if the reader takes the time to slowly process Taylor’s English, the meanings are usually clear and often extraordinarily helpful in comprehending the gist of Platonic thinking. Taylor rarely sacrifices a philosophical nuance for the sake of a dashing literary effect.

Compare the opening sentences of two translations of “The Tale of Cupid and Psyche,” one by Taylor and the other by the acclaimed modern poet and mythographer Robert Graves.

I, however will immediately recall you from grief, by pleasant narrations, and old women’s fables. “In a certain city lived a kind and a queen, who had three daughters of conspicuous beauty. Of these, the two elder, though of the most agreeable form, were not thought too lovely to be celebrated by the praises of mankind; but the beauty of the younger sister was so great and illustrious, that it could neither be expressed, nor sufficiently praised by the poverty of human speech.

Now let me tell you a fairy tale or two to make you feel a little better. “Once upon a time there lived a king and queen who had three very beautiful daughters. They were so beautiful, in fact, that it was only just possible to find words of praise for the elder two, and to express the breath-taking loveliness of the youngest, the like of which had never been seen before, was beyond all power of human speech.

The Graves version of this classic myth of the relationship of body and soul as dramatized by Apuleius in The Golden Ass is entertainingly and poetically written. Casting the allegory as a fairy tale assures easy reader accessibility. But … and this is a big “but” … it can be argued that Graves’ translation trivializes the sacred and mysterious aspect of the tale. Graves concentrates chiefly on the obvious facets of feminine beauty; Taylor upon the inadequacy of human language to capture the image of divine-created beauty. This point is underscored in Taylor’s lengthy footnote outlining the spiritual significance of the tale. The Graves version has no footnotes, eschewing them for the sake of a modern version that reads like a novel. I happily own both editions, reading Graves’ when I seek literary pleasure and Taylor when I seek philosophical enlightenment.

If the prospect of reading Taylor is appealing, know that no book has taken the place of Thomas Taylor the Platonist in offering a sample of key texts. But Taylor enthusiasts can rejoice in the forthcoming publication of ALL of Taylor’s books in a uniform edition by The Prometheus Trust, and English non-profit educational group. The first nine volumes have appeared. Twenty six more will be published in the next three years, distributed in the U.S. by Minerva Books. Of the first nine volumes, I would suggest the following for Taylor novices: Volumes two (Porphyry, offering crucial readings of Homeric myths), three (Plotinus, revealing in-depth insights into the connections between beauty and the soul), four )which includes several Neoplatonic philosophers focusing upon the soul and Nature), seven (which includes no translations but several illuminating Taylor essays on the Eleusinian and Bacchic mystery schools) and nine (Plato’s Alcibiades and The Republic).

Until this series is completed, other Taylor volumes very much worthy of attention are available from various U.S. small presses. Wizards Bookshelf offers Iamblichus on the Mysteries of the Egyptians, Chaldeans, and Assyrians and The Cratylus, Phaedo, Parmenides, Timaeus, and Critias of Plato, both essential to anyone exploring ancient definitions of the human soul. All of the Prometheus Trust and Wizards Bookshelf editions are handsomely bound and modestly priced clothbound editions. Kessinger Books offers steeply priced and cheaply produced paperback editions consisting of photocopied texts (with occasional blurred and off-center pages). Their offerings include Taylor’s version of The Golden Ass and The Commentaries of Proclus on the Timaeus of Plato. They would be of great value to anyone looking at myths about how souls undergo rites of transformation. Finally, for those on limited budgets, or for those who want only a tiny taste of Taylor’s translations and original writings for a start, there is a pamphlet published by J. D. Holmes Booksellers, Plotinus’ Essay on the Beautiful, the first third of which is a major Taylor essay. Whatever entrance to Taylor’s writings, you will be certain to rejoice in the light this “Hermes” sheds on the ever elusive forms of soul and myth.