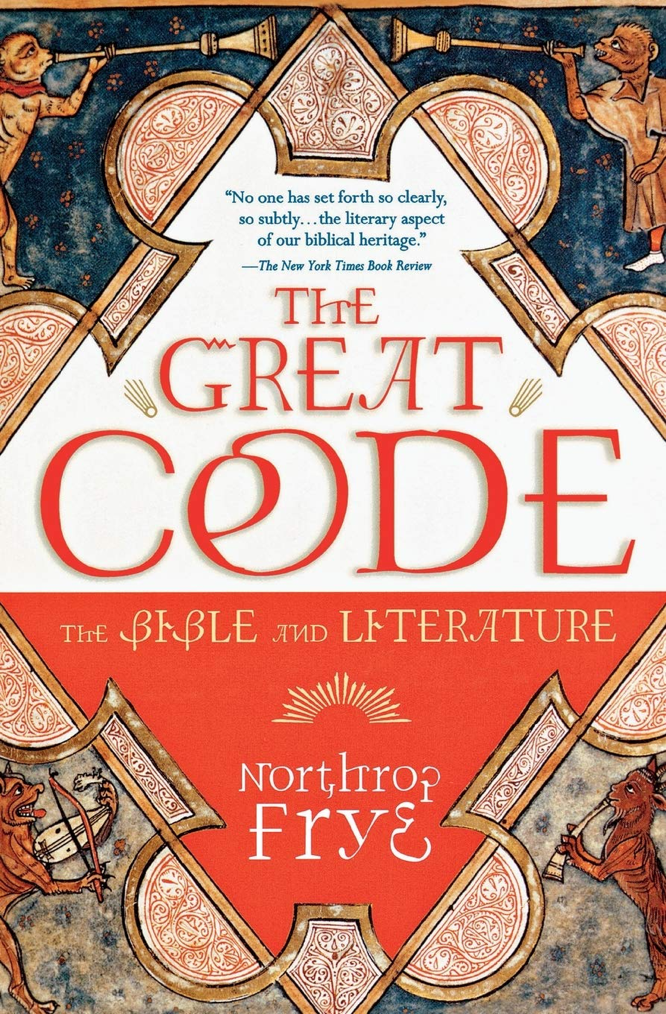 While carefully distinguishing the Bible from the various categories of secular literature, Northrop Frye applies the techniques and perspectives of his work in literary criticism to it in The Great Code. (The title phrase, like most of Frye’s, is a quote from Blake.) The book works in an exploratory fashion that proceeds from the atomic level of language, through myth and metaphor, to the continuities involved in biblical typology. Then he traces the same arc in reverse, to integrate what he had previously analyzed.

Frye makes no pleas on behalf of supernatural agency or religious institutions. He discusses the Bible as a textual curiosity, and works to demonstrate the worth it can have for thoughtful readers, as well as the contributions that it has made to the mental infrastructure of our civilization. In the denouement of this volume, the first of several he would eventually write about the Bible, Frye cites Nietzsche and Feuerbach, and muses about magic and sexuality. As always, he is a lively and elegant writer.

I would strongly recommend this book to anyone who enjoys serious literature, and yet is tempted to dismiss the Bible as an anthology of ancient superstitions. It may also be a useful tonic for those who view the Bible as their own sectarian playground–although it is less likely to endear itself to them. For me, it mostly served as a convenient review and lucid exposition of ideas I had previously considered; but there were definitely fresh nuggets to be discovered throughout. 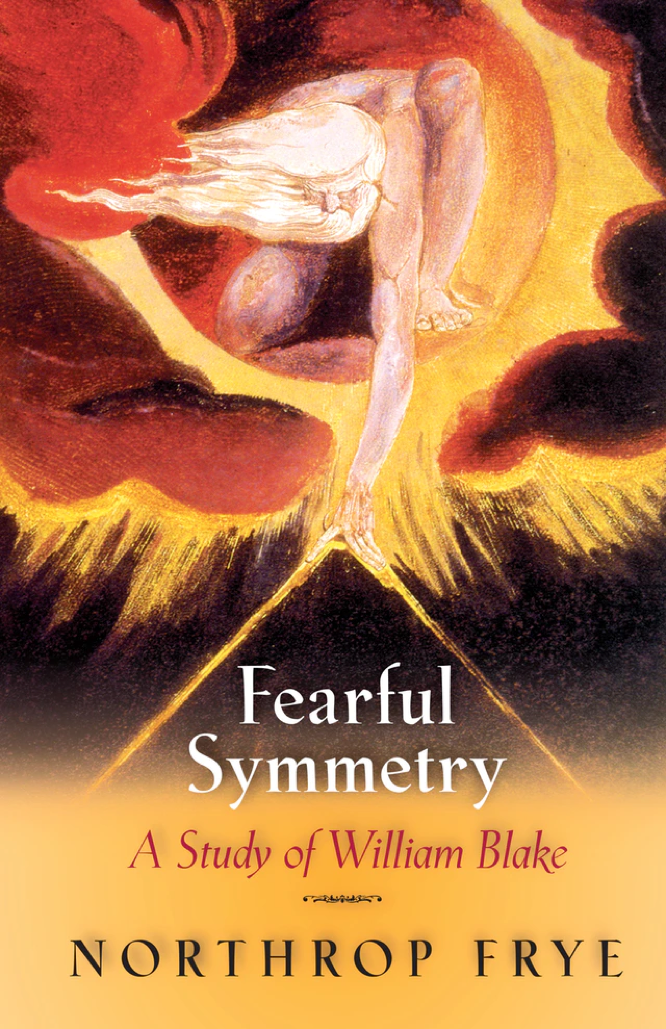 This book was Northrop Frye’s first, and probably his best. If he had never written another word, it would have been enough to make him a titan of English literary criticism. As a comprehensive study of William Blake’s writings and art, it is so far-reaching and so penetrating as to make the reader suspect that no one had ever succeeded in reading Blake before Frye did so.

While Fearful Symmetry is trained on Blake, its consequences go far beyond him: “We cannot understand Blake without understanding how to read the Bible, Milton, Ovid and the Prose Edda at least as he read them, on the assumption that an archetypal vision, which all great art without exception shows forth to us, really does exist. If he is wrong, we have merely distorted the meaning of these other works of prophecy; if he is right, the ability we gain by deciphering him is transferable, and the value of studying him extends far beyond our personal interest in Blake himself” (418). Accordingly, in the final pages of Fearful Symmetry there is a clear adumbration of the project Frye was later to execute in his magisterial Anatomy of Criticism.

Frye’s own prose is routinely beautiful. For example: “Jerusalem is Blake’s contribution to the struggle between the prophet and the profiteer for the soul of England which is England’s Armageddon: it is a burning-glass focusing the rays of a fiery city on London in the hope of kindling an answering flame” (392). But the book is not a fast read by any stretch; each page demands considered thought. Frye has so fiercely developed a sense of critical sympathy for his subject that he often continues for pages as though possessed by Blake, expressing the earlier man’s views in the words of the later, “mentally fighting” the divide between the reader’s situation and the transcendent imagination that is the prize for Blake and his ideal audience.

It is possible, despite Frye’s indisputable intimacy with Blake’s work, that there are inaccuracies involved with Frye’s attempted representation of Blake’s intentions and views. Even if that were the case, however, the fact remains that what Frye offers as “Blake” is a dynamic perspective removed from the conventional epistemes of Blake’s 18th century, Frye’s 20th, and our own 21st, and that it therefore has its own sovereign value. It exhibits genius, no matter whose. 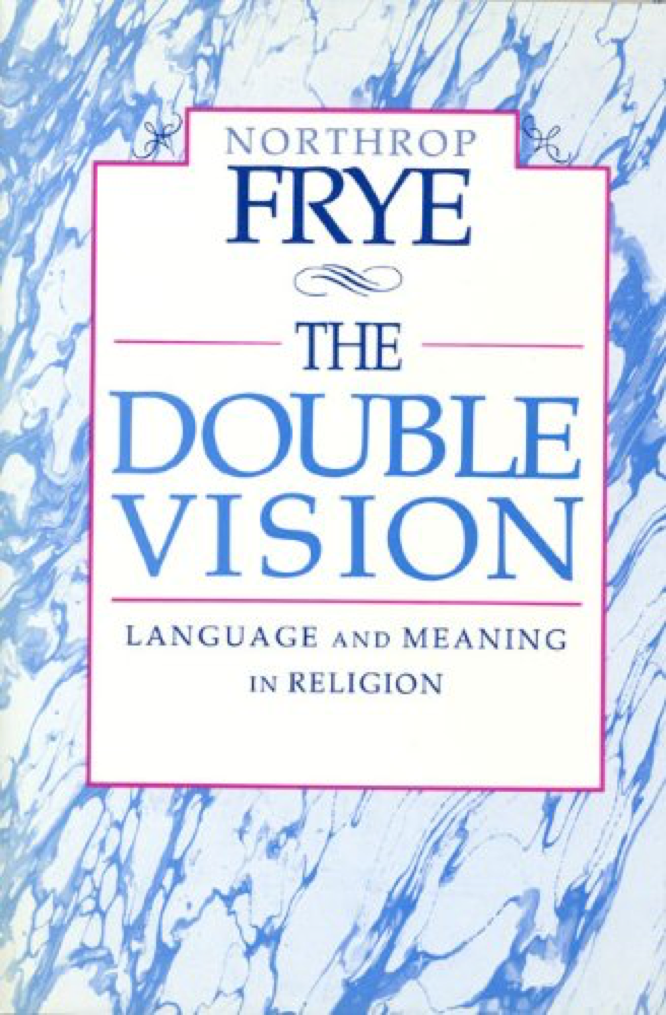 The subtitle of The Double Vision is misleading: it should have been Language and Meaning in Christianity (or perhaps in Biblical Religion, a phrase to which Frye resorts in its pages). He does advert briefly to Oriental “cults” imported into North America in the 20th century, and to the paganism of the ancient near east and Hellenistic antiquity, but only in order to frame his own religion. Considering the origins of the volume, such provincialism (not a word I expected to use of Frye!) is unsurprising; the original audience for this material were his fellow alumni of Emmanuel College, the theological faculty of Victoria University.

The four chapters were originally given as three lectures and a paper. The third chapter “The Double Vision of Time” is the best of the lot; I would be profoundly impressed to hear it given as a sermon. (Frye was an ordained minister of the Methodist-descended United Church of Canada, even if his only pulpit was in a university English department.) “The Double Vision of God” at the end is the worst. It is full of terribly wrongheaded historical claims, such as the one that the solar element only “enters Christendom with the ‘Sun King’ Louis XIV of France.” (61) This badness is also unsurprising in light of Frye’s own earlier emphasis on the distinction between Weltgeschichte and Heilgeschichte:

“That the literal basis of faith in Christianity is a mythical and metaphorical basis, not one founded on historical facts or logical propositions.” (17)

Frye’s strength is obviously in myth and metaphor, not history. The ambition of this book to make more accessible his earlier works on literary hermeneutics of the bible (The Great Code and Words with Power) is thus frustrated by his insistence on attempting to connect with the historical context of modern secular culture. There is considerable intellectual value in those earlier books from a critic who views the Bible “not as a source of doctrine but as a source of story and vision.” (3) But in The Double Vision, he is snared in a paradox, coming too close to repeating the very procedure he derides: “Most Protestantism … turned to history rather than metaphysics as an infrastructure for revelation.” (69) What is lost in the process is what made the revelation sacred, and the history that results tends toward the valorization of ignorance.