Help Occult of Personality recover from a DDOS attack

Apparently, the site for Occult of Personality has been targeted by a DDOS attack, and is down because the previous hosting company has dropped the site (apparently instead of dealing with the issue). There’s an emergency call for help during this period when the site is being recovered from the previous provider and re-hosted somewhere better, which you may wish to check out. Consider helping out if you can while the site is migrated to a new hosting service.

“Kaminsky family is in ‘all hands on board’ crisis mode this morning and we need your help! Greg’s website was hacked last night and is out of commission. The hosting company said that denial of service messages came from thousands of IP addresses that kept changing and were targeting specifically Greg’s website. Sounds like a major conspiracy theory stuff from a bad movie and it would be amusing if we didn’t rely on Greg’s site to generate half of our monthly budget! As of now, the hosting company has dropped Greg’s website and he needs to find a new hosting company that specializes in handling malicious attacks. We welcome any suggestions you might have there.

For now, we need to deal with the reality of the site being gone. While Greg is going to rebuild it, that will take time and money. Better security costs more! And some of Greg’s subscribers are jumping ship which is totally understandable. After all, would you be paying a monthly fee if you could not even get to the website?

Who knew that posting interviews with esoteric authors is such a dangerous business?! I certainly didn’t think so! As I listen to the podcasts while Greg edits them, inevitably the message is about the human race awakening, spirituality playing a bigger role in our lives, and different ways of following a spiritual path.

I would like to ask for your help in covering the website rebuilding costs for Greg. Better security means higher monthly costs and apparently each time there is an attack like this there is a one-time fee to deal with it. There is also a lost time and subscriber cost that makes me nervous. Did I mention this is how we pay our bills? Every little bit you can give will help us get over this unfortunate event, help Greg bring his site back, and put food on the table. Food is good!

Thank you for your help!” [via]

The Book of Baphomet

The Book of Baphomet by Julian Vayne & Nikki Wyrd, published by Mandrake of Oxford, was recently adapted as an Occult of Personality post at “Baphomet Unveiled“.

“The year is 1307 and The Poor Fellow-Soldiers of Christ and of the Temple of Solomon, better known as The Knights Templar, are about to get busted. An avalanche of accusations is made against the members of this powerful military Order who have been in the business of protecting Christian pilgrims in the Holy Land since 1129. Among these charges, brought against them by King Philip IV ‘the Fair’ of France, is that the Templars are idolaters. Their idol is a head, a cat, a many-faced form, a skull stuffed with grain… Whatever the details might be its name, though confessed by only a few, is Baphomet.”

“Any historian worth their discourse will explain that Baphomet (whichever of the variegated spellings we prefer) is simply the Infidel’s rendering of Muhammed. The irony that Islam, with its proscription against representation in religious art, should be the imagined origin of such idolatry raises a wry grin.

While this etymology for the name Baphomet is pretty much accepted in the academy, part of the delight of this entity is that it acts as a strange attractor around which many weird and wonderful notions coalesce.” [via] 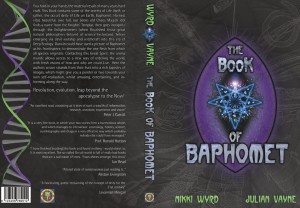 “You hold in your hands the material result of many years’ hard craft. This Book contains some of the secrets of Life itself; or rather, the occult deity of Life on Earth, Baphomet. Horned, vital, beautiful, awe full, our aeons old Chaos Magick idol finds a name from the Knights’ Templar, then goes incognito through the Enlightenment (when flourished those great natural philosophers beloved of science historians), before emerging via devil worship and witchcraft into this era of Deep Ecology.

Darwin could have used a picture of Baphomet as his frontispiece, to demonstrate the one flesh from which all species originate. Contacting this Great Spirit, the anima mundi, allows access to a new way of ordering the world, with fresh visions of how and why we could Live. Here the authors weave strands from their lives into a rich tapestry of images, which might give you a pointer or two towards your own self-realisation, whilst amusing, entertaining, and instructing along the way.

Revolution, evolution, leap beyond the apocalypse to the Now!” [via]

The Book of Baphomet – First Official Trailer from julian vayne on Vimeo.