Jesse had nothing to reveal, no secrets to tell. He would never break, as other people break, and cry out by their openness the intimacy of love. 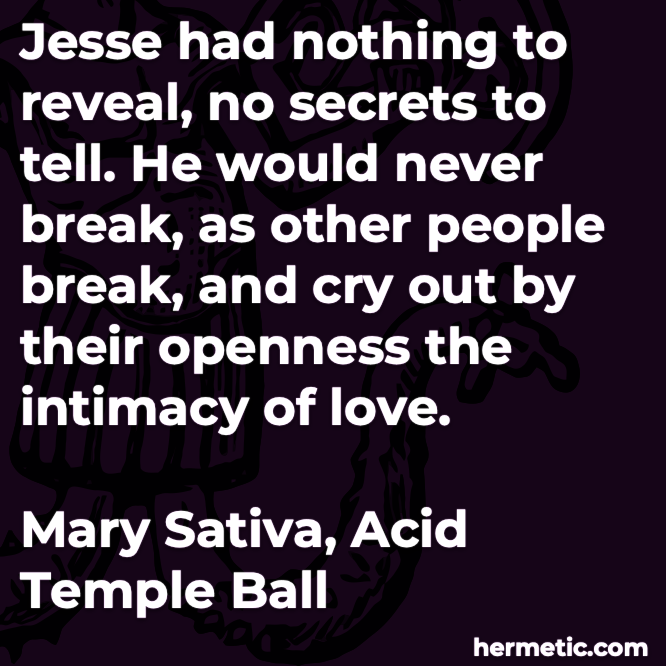 What is wrong with marketing secret demons?

I noticed a few papers that have been posted to Academia.edu‘s platform for sharing research papers. You may be interested in these.

“What is Wrong With Pagan Studies?” by Markus Altena Davidsen from Method and Theory in the Study of Religion [HT Al Billings]

“Most scholarship within pagan studies rests on the methodological principles of essentialism, exclusivism, loyalism, and supernaturalism. Consequently, pagan scholarship advances idealized notions of paganism’s essence, insider interpretations of social processes, and pagan theology. In other words, pagan studies contributes more to the development and promotion of paganism than to the critical study of the modern pagan movement.” [via]

“Marketing Demons: Joseph Perl, Israel Baal Shem Tov and the History of One Amulet” by Jonatan Meir from Kabbalah: Journal for the Study of Jewish Mystical Texts from Cherub Press

“Openness versus secrecy? Historical and historiographical remarks” by Koen Vermeir, also the author of “States of Secrecy. From Alchemy to the Atomic Bomb“, both from The British Journal for the History of Science

“Traditional historiography of science has constructed secrecy in opposition to openness. In the first part of the paper, I will challenge this opposition. Openness and secrecy are often interlocked, impossible to take apart, and they might even reinforce each other. They should be understood as positive (instead of privative) categories that do not necessarily stand in opposition to each other. In the second part of this paper, I call for a historicization of the concepts of ‘openness’ and ‘secrecy’. Focusing on the early modern period, I briefly introduce three kinds of secrecy that are difficult to analyse with a simple oppositional understanding of openness and secrecy. In particular, I focus on secrecy in relation to esoteric traditions, theatricality and allegory.” [via]