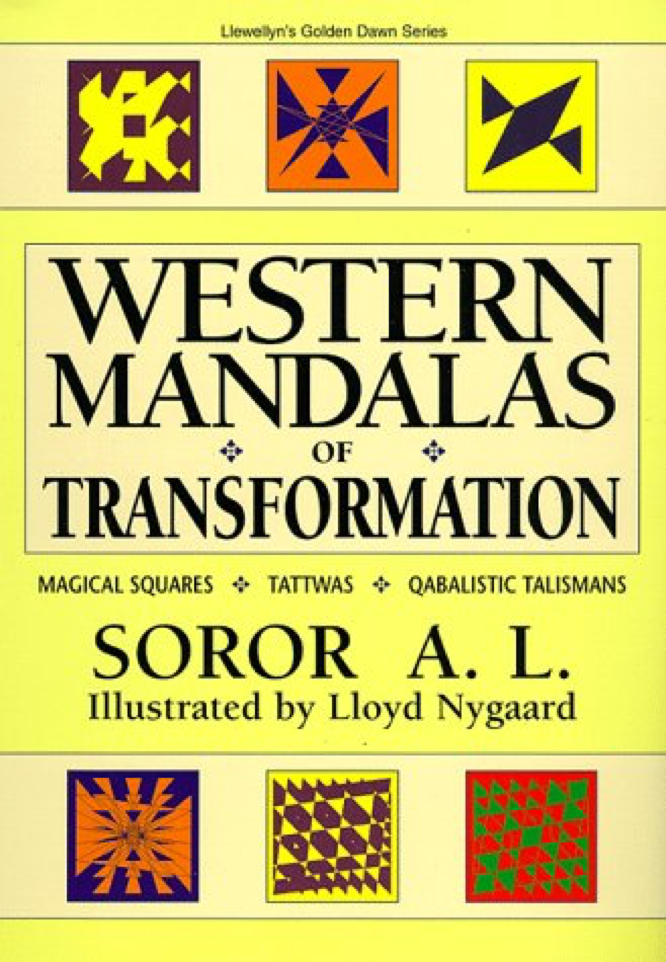 Practical aspects of Hermetic magic rooted in tradition have often been ignored in this century in favor of more “spiritual” aspects of magical work. This is unusual given that the focus of most magic, historically, has been on achieving practical effects in this world in areas such as love or finance. One of the key techniques for achieving these ends has been through the application of talismanic magic to bring effects into the physical world. Western Mandalas of Transformation focuses on this aspect of the Hermetic tradition and attempts to give the reader a grounding in talismanic magic.

Soror A.L. opens the work with a quick discussion of correspondences between the Hebrew alphabet, colors, and the Tree of Life. She explains how sigils are created by mapping names onto squares and other designs and some of the basis for Hermetic magic. The largest portion of the book (and its most valuable section) is given over to detailing the planetary squares that have been a key part of magic in the West, especially since the Renaissance. She details the mathematical basis for the squares, mistakes that have made in printed forms, and corrections and variations that exist for each of the squares. She also goes into great detail on how the sigils of the various planetary intelligences and spirits can be mapped on their corresponding magical squares and are based off of them. She then gives examples of her own work finding additional patterns within the squares that can be used as mandalas for meditational purposes or as alternate forms of planetary sigils for ritual work. The closing portion of the book deals with the Tattwas and applying color and sound to their use in talismans as well as some fairly basic examples of ritual work to be used for creating talismans from the magical squares and Tattwas.

Soror A.L.’s own work is heavily influenced by the work in the early part of this century by Paul Foster Case and the school he founded. For experienced practitioners this should not be much of a concern but it could pose some problems for the neophyte who may not be aware of the differences between Case’s work and those of other schools, especially in the attributions the Hebrew alphabet to the Tree of Life and the Tarot. These changes should not pose too much of a problem for students though, and Soror A.L. details the differences between Case’s use and traditional use when discussing his versions of the planetary squares. In some ways this is also beneficial as the student can see the different ways that other practitioners of this system of magic have developed the system. The only issue that may be troublesome for some students is Soror A.L.’s emphasis early in the book that a student of magic should form a relationship with their Holy Guardian Angel before engaging in this sort of work. Many schools see this relationship as one that forms as the end result of years of work and this difference in viewpoint could keep this otherwise excellent work from being used or recommended by students and teachers of these schools.

In summation, this book is a good basic and practical introduction to talismans, especially in the area of the planetary squares and it would be worth reading by novice students of the Hermetic tradition as long as they keep its basis in Paul Foster Case’s work in mind. For advanced students, it could possibly make a handy reference to this material but they might be better served by Agrippa’s Three Books of Occult Philosophy, which contains the roots of this material along with so much else which has become part of the core of the Hermetic tradition since his time.