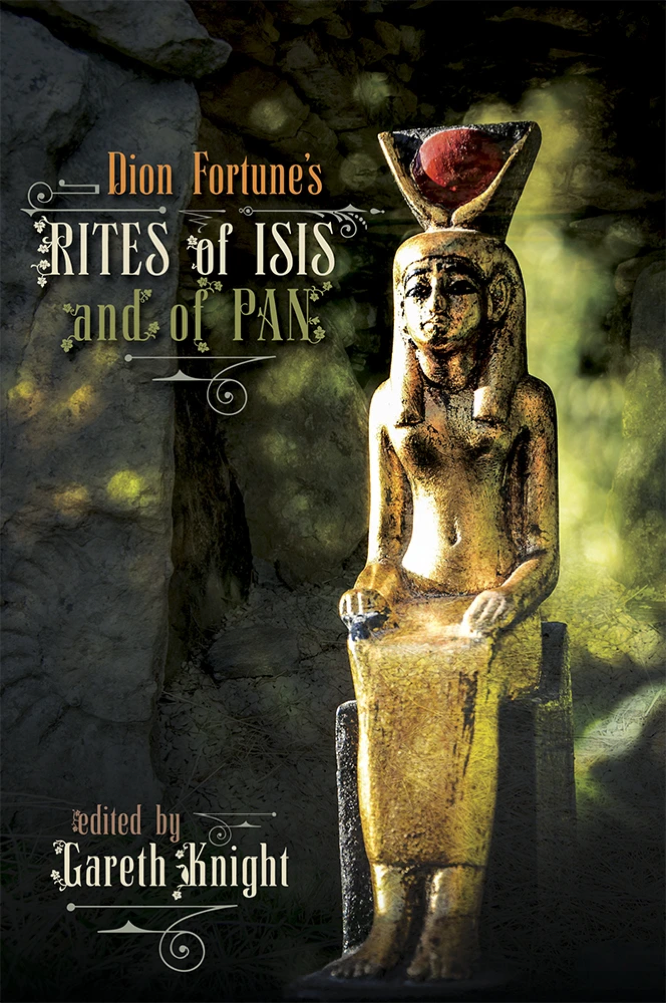 Dion Fortune’s Rites of Isis and of Pan is a slender book, but one with a lot of valuable content. As the title suggests, it is constructed around a pair of liturgical texts by the eminent early twentieth-century occultist Dion Fortune. These appear to have been her only forays into dramatic ritual for public audiences or untutored congregations, and they were produced by her at “the Belfry,” a converted church building in the Belgravia district of London. The full rituals are included, and framed by four chapters of editorial text from Gareth Knight, who provides a history of these rituals and delves into the manner in which they were epitomized in Fortune’s principal occult novels: The Winged Bull, The Goat-foot God, The Sea Priestess, and Moon Magic.

Fortune’s rituals with Knight’s study and commentary constitute roughly the first half of the book, and the second is a set of a half-dozen papers and addresses by Fortune that are relevant to her rites. Three of these were originally published as articles in The Inner Light Magazine, but a couple of them seem to be from previously unpublished records of the Society of the Inner Light that Fortune founded, and the very first appendix is the significant 1933 essay “Ceremonial Magic Unveiled” that originally appeared in The Occult Review.

Although Knight avoids crediting Aleister Crowley with any influence on Fortune’s dramatic rites, “Ceremonial Magic Unveiled” provides ample circumstantial confirmation that Crowley’s Rites of Eleusis were a significant model for her (at least as much as the 1899 “Rite of Isis” by Mathers cited by Knight, 8). In that article, Fortune classes herself with Crowley and Regardie as the “unholy trinity of revealers of the Mysteries” (86). She praises the contents of Crowley’s Equinox, which included his Rites of Eleusis, and even calls on Regardie to perform the editorial work by which he would later produce the digest Gems from The Equinox (91). She writes:

“To speak any word in mitigation of the general condemnation of Crowley is a thankless task, for panic-stricken people immediately conclude that one is in league with the devil. Nevertheless, Mr. Regardie has had the courage to do this, and I should like to add my voice to his. To make use of a man’s work without acknowledgement is no better than picking pockets.” (Ibid. That final sentence would become ironic a few years later, when Regardie would quote a full page of text from Fortune’s The Mystical Qabalah in his own The Middle Pillar, attributing it only to “One very clever expositor.”)

Like Crowley in his Rites, Fortune drew poetic passages in her own from the work of Swinburne, specifically “The Last Oracle” (14). Her original contributions as a poet are decidedly less sure than those of the Beast. I suppose I winced physically when I encountered her end rhyme of “path” and “Daath” (74).

Other articles among the appendices supply Fortune’s own extensive analyses of the esoteric infrastructure of her fiction. “In an attempt to compromise between the symbolic and the rational modes of presentation I decided to avail myself of the form of fiction as being a mode of presentation which could approach the subconscious levels of the mind, which think in images, without losing touch with the conscious levels of the mind which think in words, thus making contact once again with those potent levels of the mind that have fallen into disuse in modern civilisation” (103). Her discussion of The Winged Bull in particular highlighted the magical potency of English places in ways that put me in mind of the psychogeography of Iain Sinclair (115-6).

Fortune’s dramatic rituals and her novels alike rely on sexual polarity as the chief engine of magic, and she has the lector of her Rite of Isis declare, “All the Gods are One God, and all the Goddesses are one Goddess” (70). The God can evidently be summarized as Pan and the Goddess as Isis, with these two rituals (each of which features officers of both genders) sufficient for her purpose–which aims more at integration than analysis.