After these came the Periphallia, a troop of men who carried long poles with Phalli hung at the end of them; they were crowned with violets and ivy, and they walked repeating obscene songs. These men were called Phallophori; these must not be confounded with the Ithyphalli, who, in indecent dresses and sometimes in women’s costume, with garlanded heads and hands full of flowers, and pretending to be drunk, wore at their waist-bands monstrous Phalli made of wood or leather; among the Ithyphalli also must be counted those who assumed the costume of Pan or the Satyrs. There were other persons, called Lychnophori, who had care of the mystic winnowing-fan, an emblem whose presence was held indispensable in these kinds of festivals. Hence the epithet ‘Lychnite’, given to Bacchus. 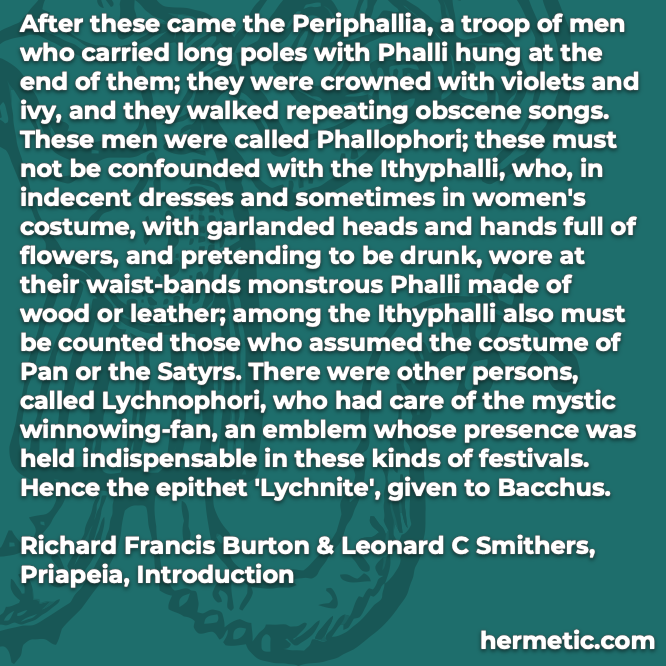 (Io Pan! Io Pan!)
Devil or god, to me, to me,
My man! my man!
Come with trumpets sounding shrill
Over the hill! “A fairy!” hooted the centaur, throwing back his head and laughing wildly. “Why in the name of Pan would anyone ever waste their time on those silly little pests! In the Center of the Fire: Invocation

“In the Center of the Fire: Invocation” from Imperium Pictures is a video with James Wasserman discussing the concept and practice of invocation.

James Wasserman is the founder of the Ordo Templi Orientis’ (O.T.O.) NYC Tahuti Lodge and one of the foremost practitioners of the magical system of Aleister Crowley. His most recent book is In the Center of the Fire: A Memoir of the Occult 1966-1989, which chronicles the occult scene in New York City in the 1970s and ’80s. In this segment, Wasserman describes the process of invocation — the identification of oneself with a deity or archetype — in reference to the gods, Pan and Tahuti.

“The Virgin of Eternity lies supine at thy mercy, and thou art Pan!” [via]

You may be interested in “Occultural Film Series: Magick in Cinema” [also] which is going to be at Northwest Film Forum on Thursday, April 5th at 7pm in Seattle, WA. This appears to be the inaugural event for what is hoped to be an ongoing series, so even if you can’t make this one, consider keeping an eye out for future events.

“Thursday, Apr 05 at 07:00PM
Artist, writer and filmmaker Brian Butler presents a program that explores the occult as depicted in avant garde and experimental film. Magick has been defined by Aleister Crowley as “the science and art of causing change to occur inconformity with the will.” The short film is a perfect medium for modern occult ritual—utilizing sound light and color to alter the consciousness of the viewer. This program includes pioneers in the field of occult film as well as newer works by Brian Butler.

“Established 2012 the Occultural Film Series features the esoteric and the occult in cinema. Embracing historical and contemporary examples in film and video of esoteric currents in moving pictures.

Co-hosted by the Northwest Film Forum and the Esoteric Book Conference.

Of course, the quoted definition of “magick” by Aleister Crowley can be found in “Definition and Theorems of Magick” from Magick in Theory and Practice:

“Magick is the Science and Art of causing Change to occur in conformity with Will.”