Dragon’s Blood Incense Sigil Paper from Rosarium Blends may be of interest. 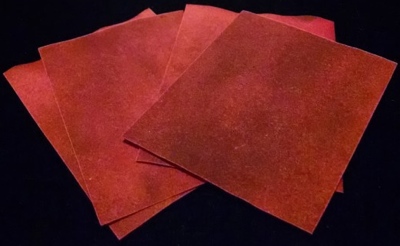 “Self igniting sigil paper infused with the resin of ‘Dracaena cinnabari’, the original and true dragons blood, spoken of in so many occult formularies. Scented slightly with other aromatic resins to form a self igniting incense paper to be inscribed with sigils and fired off in ritual.

The paper sizzles and sparkles like a lit fuse without flame and produces a sweet scent tempering the martial influence of the dragons blood resin. Focusing, enhancing and directing the effects with the sigilized intention and will of the practitioner.”

“Convention concerning the beginning of Post-anarchist discourse locates its origin in Hakim Bey’s work in the 1980s; however, no commentator has sufficiently analyzed the thoroughly spiritualized anarchism upon which it is based, termed ‘Ontological Anarchism,’ nor the group that promoted it, the Association of Ontological Anarchism. This article draws attention to the ways in which the interface between a starkly postmodern form of esotericism called Chaos Magick and the anarchist tradition produced Ontological Anarchism, and, further, to the implications of this hybridity on the historiography of Post-anarchism.” [via]

Hermetic Library fellow Mark Stavish pointed out a paper by Michael LaRiviere on “Neopaganism” over at Thoughts of Amherst which may be of interest. Mark says, “Are Second Generation NeoPagans More Conservative Than Their Parents? A well done undergraduate paper from Amherst (2007).”

“I first was curious about individuals’ spiritual and religious life, and I made a point to differentiate between the two points. For instance, I wondered if individuals’ beliefs may have conflicted with the religion’s stated beliefs, or if one’s personal rituals were less formalized than group religious rituals. The very nature of Neopaganism provides an interesting answer to this question, as the movement is much more individual-oriented than traditional old religions. However, in considering the question of personal spirituality versus religion, another question arose as to the evolution of the religion. Did subsequent generations of Neopagans have differing views on spirituality and religion? Considering the liberalization of Roman Catholicism over the past fifty years, I thought perhaps a similar trend might be seen in Neopaganism. The answers I found were surprising, reflecting simultaneous pulls in various directions.” [via]