Julianus reviews Master of the Fearful Depths by Patrick H Adkins in the Bkwyrm archive. 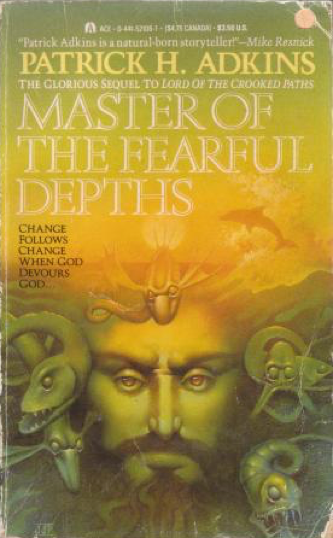 This book, along with its sequels “Lord of the Crooked Paths” and “Sons of the Titans,” form an attempt to translate Greek myth into fantasy fiction. They cover the reign of Kronos as ruler of the Gods and end with the boyhood of Zeus. The thing I really like here is that Adkins is actually writing about the Gods as the Greeks understood them rather than trying to explain them away as space aliens or mutants or some other such nonsense. While these books aren’t really great literature, they do a pretty good job and are worth picking up. It really is too bad the series ended prematurely since the next book would have to cover the War between the Olympians and the Titans, a great subject for a book if there ever was one.