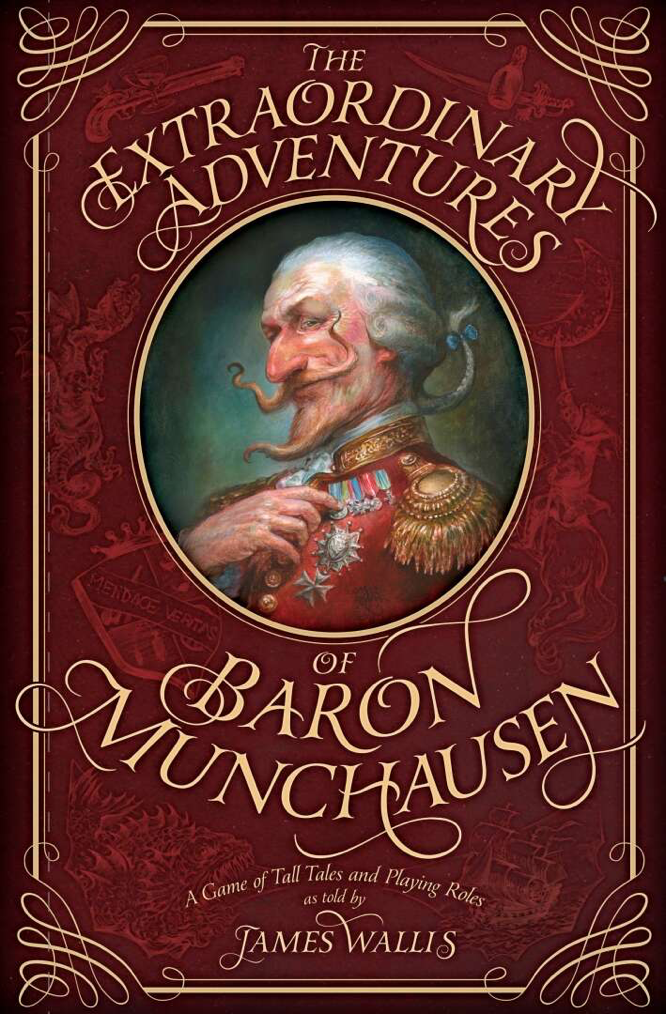 This Extraordinary Adventures of Baron Munchausen is a rule book for a game I haven’t played. In fact, I might never get around to playing it, but I don’t regret for a moment reading the full 130 pages, which are hilarious all the way through. It is not necessary to have familiarity with Rudolph Raspe’s original Munchausen stories from the 18th century in order to appreciate this book; even a secondhand acquaintance through the Terry Gilliam feature film will be sufficient.

The game described is one of competitive yarn-spinning, sort of like a table-top roleplaying game with a minimum of rules constraint and a retrospective rhetorical style. A frame-story relates author James Wallis’ ancestor’s encounter and collaboration with the original Baron, as well as his own rediscovery and continuation of the work of publishing the Baron’s game. The rules are digressive and somewhat confusing, but helpfully summarized “in brief” in a two-page appendix. Another appendix lists hundreds of play prompts or story challenges.

This third edition includes two expansions with a host of variants, including adaptation for younger players (“My Uncle the Baron”), thematic inflections (Arabian Nights, science fiction, occult horror, prehistory, 007-type espionage, cats, and others), and suggestions for online play, “whilst one has a sky-fish hooked on the line … using the vibrations of the fishing line to resonate with one another at a distance” (124).