You might be interested in Carnivalia’s Witchboards, talking boards, crafted by Chas Bogan. These are creative options for those looking for talking boards not produced by a commercial board game company. In addition, there are a number of articles and links about talking boards, including “Talking Board History” and “Talking Boards For Modern Magick: Rituals & Sigils“, that may be of further interest. 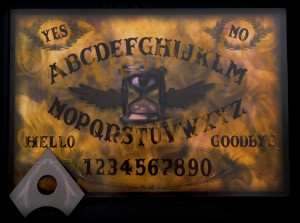 “The swirling colors composing the background for this board are hypnotizing. From such an eerie atmosphere emerges a familiar icon, that of the winged hourglass. Etched onto many a tombstone, this symbol exists to remind us that time is fleeting. Often this symbol represents the Angel of Death, whose gaze is ever upon us, and whose mighty wings will at some unknown moment sweep down and claim us for the afterlife.

The font for this project was inspired by the antique Ouija board popularized by Fuld. Similarly, the characters for ‘Phantom Hour’ invite playfulness, yet are a touch sharper, with tiny curls (or hooks) at their tips.

This winged hourglass transgresses time, and may serve you in understanding the past, as well as where you may be headed in the future. Imagine it functioning as a psychopomp, bringing from the phantom realms to your fingertips the messages that the dead wish to tell you.” [via] 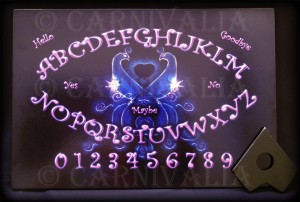 “It’s deep purple and indigo hues set a soothing mood, ideal for inspiring the type of meditative state favored by mediums and anyone eager to delve into his or her unconscious mind.

In many cultures the Divine Twins play an important mythic role, representing the power of opposites brought into Divine union. Here we see the twins as the Middle Eastern Yezidi peacock angel Melek Ta’us, who in the Feri tradition of Witchcraft is said to be the twins manifested as one being.

I have always loved the symbolism of two peacocks to represent the love shared between men. Here they are looking deep within each other’s eyes… their hearts aflame. They are equals, and are completely present with each other. They are the Blue God… the God Self within each of us… and they are here merging in Divine love. Their nature is the Black Heart of Innocence and through their union love is renewed.” [via]

“This is a quality artisan product, and all elements, from its unique design to its decorated planchette, are handcrafted at Carnivalia’s studio by artist Chas Bogan. Its wooden board measures nineteen by thirteen inches. The underlying image is protected by layers of clear varnish, creating a smooth finish that is ideal for easy movements of the planchette and will protect your board for generations as your relationship to this heirloom matures.” [via] 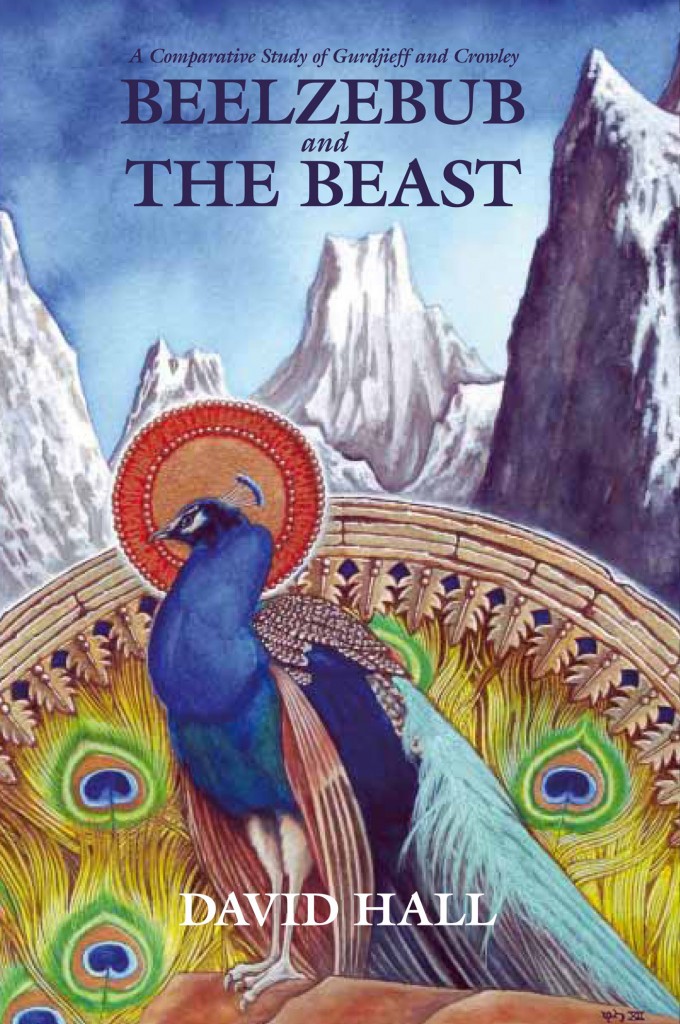 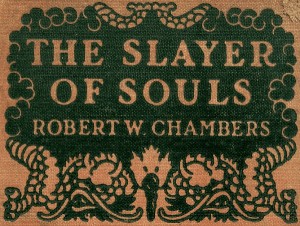