The Crowley Corollary achievement has today been unlocked in the 2016 US elections!

I conjured the Crowley Corollary to Godwin’s Law as a “lesser banishing ritual of the analogy” against a particular and common specious rhetorical collocation of Aleister Crowley and Satanism.

“Once a discussion of some topic reaches a comparison between Satanism and Aleister Crowley, its usefulness is over.” [via]

“The person guilty of The Crowley Corollary knows nothing interesting or useful about Aleister Crowley or Satanism, if anything at all.” [via]

In what is undoubtedly the most bizarre Wikileaks revelation to date, Clinton campaign chairman John Podesta was invited to a “spirit cooking dinner” by performance artist Marina Abramovic, to take part in an occult ritual founded by Satanist Aleister Crowley.

Psychostasia with Daemonia Nymphe at Riverside Studios on Mar 23, 2014 at 8pm

Psychostasia: The Performance is presented by Daemonia Nymphe Δαιμονία Νύμφη and Theatre Lab Company, directed by Anastasia Revi, at the Riverside Studios, London on March 23rd, 2014 at 8pm.

“Illusions, reality and myth mingle in this enchanting labyrinth of stories, dreams and emotions …
Zephyrus, the God of the West wakes up whispering.
The girl who wanders in chaos finds herself dancing on the sea waves.
The moon turns the fairies lunatic.
And the twin brothers, Sleep and Death, play with minds and souls in this charming and shimmering universe of music, movement and image.

A unique collaboration between Daemonia Nymphe and Theatre Lab Company where music, visuals and dance performance creates an illusion dreamwork that becomes the journey of psyche … Psyche /ˈsaɪki/ : the totality of the human mind, conscious and unconscious.” [via]

Invocation of the Androgynous Muse

“Invocation of the Androgynous Muse” from Chemical Marriage is a record of their “Interactive Performance Art for New Orleans Fringe Fest, 2013” [also].

Magic Words: The Extraordinary Life of Alan Moore by Lance Parkin, due on December 1, 2013 from Aurum Press, is part of the collection at the Reading Room courtesy of the publisher. 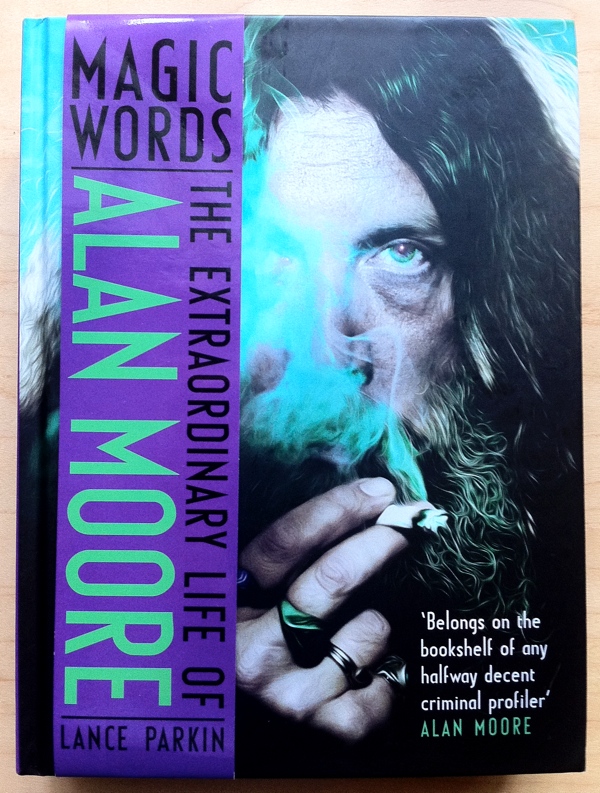 Now, as Alan Moore hits sixty, it’s time to go in search of this extraordinary gentleman, and follow the peculiar path taken by a writer quite unlike any other.” — back cover

“Portrayed in the media as a recluse and an eccentric, the creator of such influential works as V for Vendetta, Watchmen and From Hell is a character easily as complicated as his creations. Despite international success, Alan Moore has lived his entire life in the same Midlands town where he was born. Although he began work in the comics underground where his edgy and highly personal style found an equally edgy following, his most famous work was done for major U.S. publishers and adapted for big-budget Hollywood films. And just when he could have made millions in the mainstream he turned his back on the entertainment industry and focused his attentions on performance art, writing erotica, and the occult.

On the eve of Moore’s 60th birthday, author Lance Parkin has written the definitive biography of this ‘extraordinary gentleman’. Based on life-long studies of Moore’s work and an exceptional series of personal interviews, Magic Words reveals the man behind the myth and mischief — and bears the rare distinction of an endorsement by Moore himself!” — release copy

The Alchemy of Storytelling

“Mark Gonzales & Aerosol Ali — The Alchemy of Storytelling — a story of medicine for all you who have ever felt abused by discourses so damaging & boring, when what we need is beauty.

We invite you to watch.
We ask you to share.
We love when we grow.
________
THE WHY:
After traveling across fifteen countries, listening to stories of wounds & resiliency, each so painfully beautifully unique, a common request was identified: the need for new language & ways to understand ourselves. This is my offering to them, to you, & to all of us who have grown tired of the boring & bigoted ways people speak about the things we love.
_________
THE WHO:
Mark Gonzales {Storytelling & Idea Design} — @WageBeauty
Mohammed Aerosol Ali {Muralist & Urbanography} — @aerosolali
Rory Barber {Cinematographer} — @roryjbarber
________
THE WORDS:

When our children are elders their children will call this time we live in “the era of wounded dreams” when systems openly assassinated imaginations.
No one tells stories anymore.
It’s as if we believe gravity is real & unicorns are not.
We’ve swallowed the dust coated cyanide that tells us the narratives of invaders hold more truth than the memories of my grandparents.

How damaged our belief systems are.

We tell ourselves existence is resistance, not life is affirmation.
to fight and write back, but not fight and dream forward
to deconstruct empire but rarely blueprint ourselves
it is as if we have forgotten that a nation is nothing more than a collection of narratives.

A community does not make sense of the world thru statistics but stories and bigots are painfully unimaginative
this is why they want to censor our culture
they know they cannot compete with our creativity.

So this is for you
who dance write speak dream love exhale the work anew
who place starlight in the barrel of rifles and march against darkness
militant sunflowers holding up your heart up like a hand grenade
hummingbird in a hurricane with hope strapped to its core like it was c4.

We remember the only reason we are alive
is because we had at least one ancestor who refused to die
and lived long enough to have children who did the same.

“A public piercing and suspension by rope. Viewer discretion is advised.” [via]

Hoboken Pizza Man walks in on an interesting scene

Hoboken Pizza Man walks in on an interesting scene is a video by Tim King, a social experiment / performance art piece that for me is reminiscent of Cacophony Society style events. [HT Laughing Squid]

“I decided to host a ‘secret society’ style birthday dinner for me and my closest friends. Wouldn’t have been complete with out some Hoboken Pizza.

For more of a detailed explanation of why I did this and how it wasn’t about scaring the pizza man, but really just a part of my lifestyle — check out my blog” [via]

“In this – the first ever – episode of SittingNow TV, we present the first of four lectures from the ‘Summer of Love’ event put on by Scarlet Imprint back in August.

Ulysses Black is not a name known to the occult community, despite having generated, under different guises, considerable interest through much sought after publications and artwork. As Ulysses Black he assails the issue of identity through performance art and ritual action. From influences such as Joseph Beuys and Hermann Nitsch as well as the Western Magical Tradition he plots a return to mythical Ithaca.”

“The first episode showcases Ulysses Black grappling with the issues of identity, magickal names, performance art and authentic action.” [via]