Hermetic Library fellow T Polyphilus reviews Rehearsals for Oblivion, Act I: Tales of the King in Yellow, edited by Peter A Worthy. 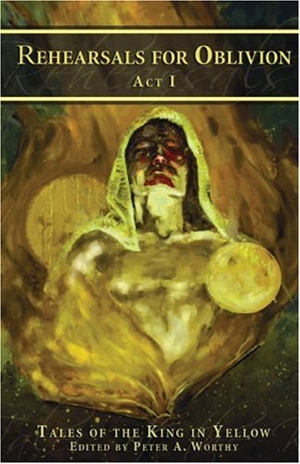 This collection consists of “Tales of the King in Yellow,” i.e. instances of the microgenre that I call the jauniste weird, dependent from The King in Yellow by Robert Chambers. The jauniste literary current is now most often regarded as an annex to the Yog-Sothothery (latterly-dubbed “mythos”) of H.P. Lovecraft, although it came first: the imaginary text The King in Yellow (a play) served as an inspiration and model for Lovecraft’s similarly dreaded and deranging Necronomicon.

Rehearsals for Oblivion is subtitled Act I, and the back cover boasts that it is “the first volume in a comprehensive set,” but none further have appeared since 2006, as far as I can determine. It does have company, however. In 2012, the collection A Season in Carcosa was issued under the editorship of Joseph S. Pulver Sr. Both have materially unimpressive softcovers for their first (and so far only) editions. To contrast the contents of the two, editor Peter A. Worthy’s earlier book Rehearsals for Oblivion is far more conservative in the way that the stories integrate the Carcosan tropes and themes. There are a handful of short poems as well.

Rehearsals successfully avoids the use of the so-called “Yellow Sign” graphic invented for games in the late 20th century. There is a sort of double-yod symbol at the foot of each selection which may be intended to suggest the “real” sign. Tim Wilson’s cover painting is quite beautiful, and the fonts chosen for the texts meet my full approval.

My favorite Rehearsals included the Wilde homage “In Memoriam” by Roger Johnson and Robert M. Price, and Carlos Orsi Martinho’s “Machine in Yellow,” both of which trace attempts to produce the banned play on stage, in very different contexts. Other notable stories include the noir “Broadalbin” by John Scott Tynes, and “The Adventure of the Yellow Sign,” in which G. Warlock Vance supplies a jauniste Sherlock Holmes tale.