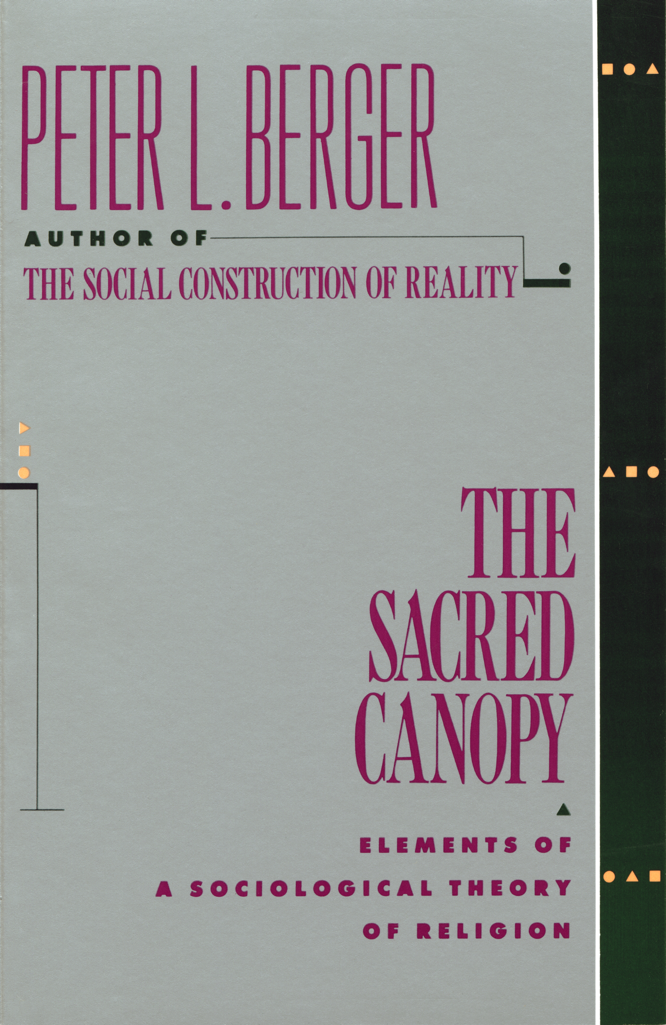 Here is an older book I should have read a couple of decades ago (when it was not new), in order to apply its insights in my academic work. First published in 1967, Berger’s The Sacred Canopy is subtitled “elements of a sociological theory of religion.” Despite his insistence on sociology as an empirical discipline, the book is not oriented to primary studies of the sociological features of contemporary religious operation. Most of the book is trained on very large-scale phenomena over long periods, using lenses inherited and adapted from theorists such as Weber, Durkheim, and Mead.

Berger hardly touches the term “belief,” but makes extensive use of the closely related concept of “plausibility,” advancing the creation and maintenance of “plausibility structures” as inherent operations undertaken by society in the religious mode. There are useful distinctions between the methods used to maintain plausibility in religions that dominate entire cultures and the different strategies that are necessarily adopted by “cognitive minorities” He also highlights theodicy, taken in a sense generalized beyond the usual theological problem to any religious explanation of the anomic phenomena of death, suffering, and evil.

The later parts of the book are preoccupied with the phenomena of secularization and their relationship to parallel and dialectically related developments in economic and scientific development. Throughout the book, Berger uses examples from a wide diversity of religions, but in these sections he pays special and deserved attention to Christianity generally, and Protestantism in particular. “If the drama of the modern era is the decline of religion, then Protestantism can aptly be described as its dress rehearsal” (157).

Perhaps the high point of the whole volume for me was “Appendix II: Sociological and Theological Perspectives,” in which Berger points out some methodological distinctions, withdraws and revises positions made in a previous book (The Precarious Vision, 1961), and proposes possibilities for constructive dialogue between sociology and theology. He is clear that such possibilities may not be realized, because of the demands for “openness” that they make on both sides.