Aleister Crowley: Magick, Rock and Roll, and the Wickedest Man in the World

Aleister Crowley: Magick, Rock and Roll, and the Wickedest Man in the World by Gary Lachman, from Tarcher / Penguin, is due to release in May 2014, and may be of interest. 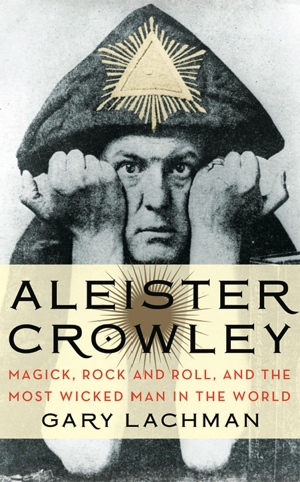 “When the mystic, occult magician, poet, and founder of the religious philosophy of Thelema, Aleister Crowley–a.k.a. “the Great Beast,” “the Wickedest Man in the World,” and “the Word of the Aeon”–died in an obscure boarding house in Hastings, England, on December 5 1947, at the age of 72, few knew he was to become one of the most enduring pop culture figures of the next hundred years.

In this definitive work on the life and legacy of the “great beast,” Aleister Crowley: Magick, Rock and Roll, and the Wickedest Man in the World (Tarcher Books, $17.95, April 17, 2014), author Gary Lachman traces both the arc of the occultist’s strange and controversial life, and his influence on rock-and-roll giants from the Rolling Stones and Led Zeppelin, to Black Sabbath and Blondie, of which Lachman was a founding member.

Twenty years after his death, in the middle of the Swinging Sixties, Crowley was more popular than he ever was in his lifetime. In 1967, the Beatles put him on the cover of Sgt. Pepper’s Lonely Hearts Club Band. The Rolling Stones became, for a time, serious devotees, their music and image being groomed by one of Crowley’s most influential disciples, the avant-garde filmmaker Kenneth Anger. Today, his face is practically as well known as that of Elvis, Marilyn, or Che. His libertarian philosophies informed generations of notable heavy metal groups like Led Zeppelin, Black Sabbath, Metallica, and others, while these same beliefs form the subject of scholarly theses. His image hangs in goth rock bars, occult temples, and college dorm rooms alike, and he’s turned up as a character in pop cultural environments from Batman comic books to Playstation video games.

But ALEISTER CROWLEY is more than just a biography of this continually compelling and divisive figure–it’s also a portrait of his influence on modern pop culture and rock music, from one who knows firsthand. Before he was the acclaimed religious historian behind books like MADAME BLAVATSKY and JUNG THE MYSTIC, Gary Lachman was Gary Valentine, a young New York City punk rocker who immersed himself in occult study when he wasn’t busy playing bass with Rock and Roll Hall of Fame inductees Blondie. Lachman experimented with Crowley’s life philosophies as a young man, coming to understand their allure and power–as well as how they were, ultimately, spiritual dead ends.

Decades later, as a religious scholar, Lachman returned to Crowley, fusing his own personal experiences with meticulous research and sharp-eyed cultural observation, to paint the first truly thorough portrait of one of the most famous occult figures of all time. ALEISTER CROWLEY show readers not only who “The Great Beast” was and where he came from, but also why he’s still on our minds nearly one hundred years later.” [via]

An upcoming exhibition at the Daniel Blau gallery in London will feature Neal Fox’s icons of modern pop culture, including Aeister Crowley. The exhibition “Beware of the God” will run from Jul 8th through August 10th.

“Fox’s drawings depict a phantasmagoric journey through the detritus and mythology of pop culture. From a life-long obsession with the tales of his dead grandfather, a World War II bomber pilot, writer and hell raiser, his large-scale drawings have developed into increasingly layered celebrations of the debauched and iconoclastic characters whose ideas have helped shape our collective consciousness.
Fox’s latest project takes many of the recurring subjects of his drawings and portrays them through the medium of the stained glass window. As traditional church windows show the iconography of saints, through representations of events in their lives, instruments of martyrdom and iconic motifs, Fox plays with the symbolism of each character’s cult of personality” [via]

For more about this exhibit, see also Modern saints, although the reviewer here succumbs to the facile and hysterical Crowley Corollary [via, also] by calling the figures that surround Aleister Crowley “satanic”.