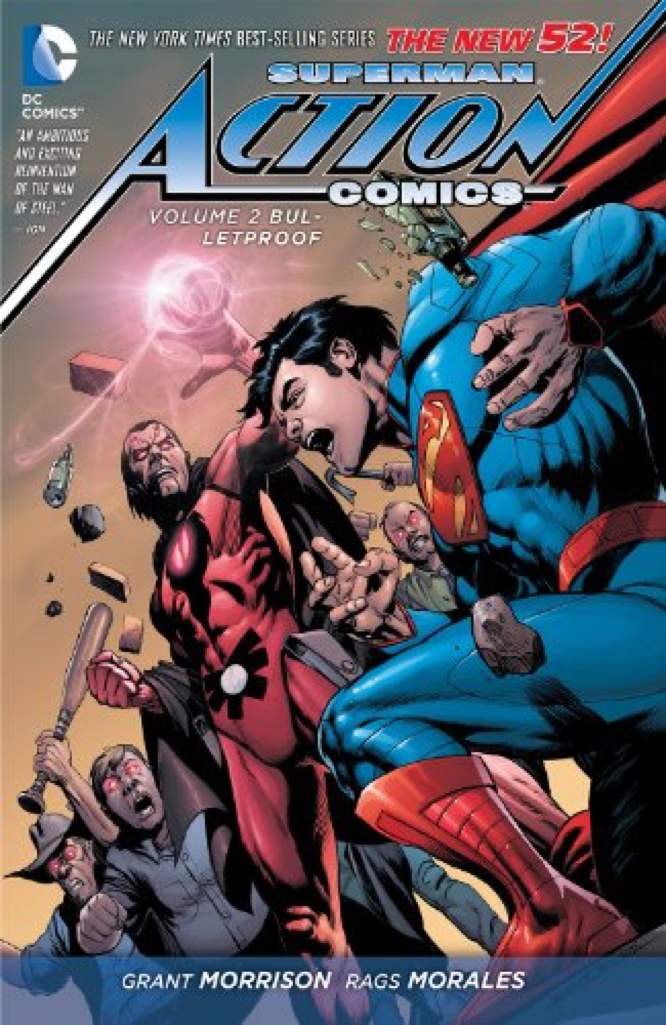 Although this second collection of the new Superman Action Comics still sports a cover byline for Grant Morrision and Rags Morales, the contents are the work of a larger mix of creators. Ben Oliver supplied art for some Morrison stories, and the writer-artist team of Scholly Fisch and Cully Hammer contributed pieces both in the main narrative plot-line and on Earth 23, where a black Superman has the “secret identity” of US President Calvin Ellis. Hammer’s art reminds me pleasantly of that of Howard Chaykin.

There is less of a linear, serial plot in this collection, although the stories are all clearly tied together in a larger continuity. One of the most significant developments is the death of Clark Kent, as Superman sheds that persona in favor of the firefighter Johnny Clark. Although it becomes clear that this change is temporary, the status quo ante is not restored in this volume.

I might have it in me to read a third one of these volumes before my current interest in Superman wanes. [via] 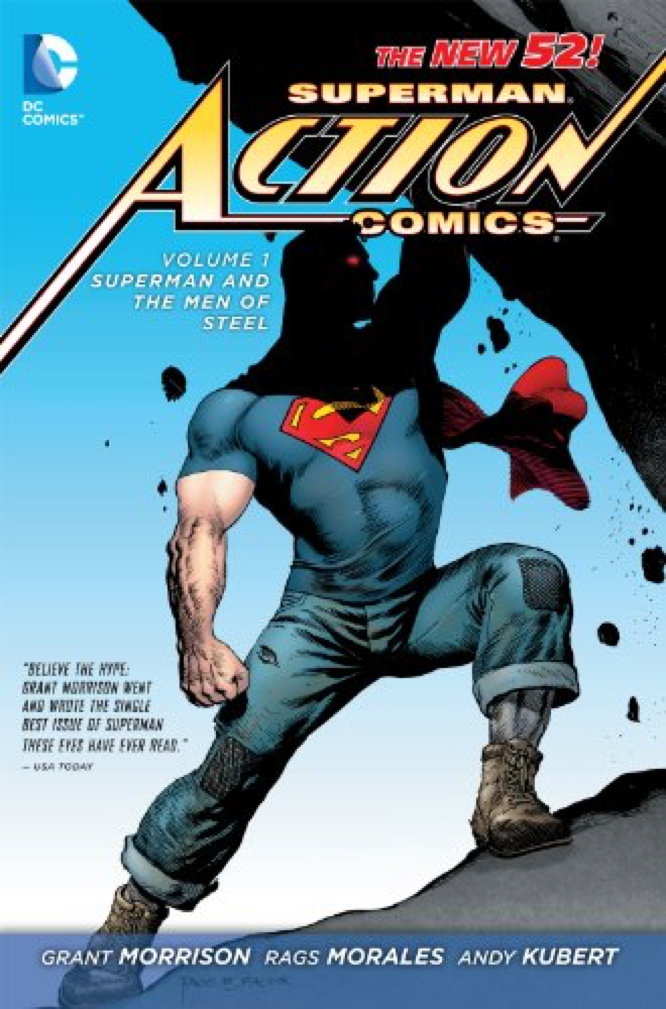 After his stunning turn at a multi-issue Superman keystone story in All-Star Superman, Grant Morrison returned to a full-on 21st-century reboot of Superman in a revival of the original Action Comics title. Rags Morales provides solid art, and does a good job of collaborating with Morrison’s aim to restore elements of the 1940s Superman in this version of the hero, although the visual content here falls a little short of Frank Quitely’s turn in All-Star Superman.

The “Men of Steel” in the title of this eight-issue collection are an assortment: John Corben as the Steel Soldier cyborg of the Metal-Zero experimental military program, the robotic Terminauts unleashed by the Collector of Worlds, and the backup superhero Steel who is the Metal-Zero metamorphosis of inventor Dr. John Henry Irons.

There are many changes to the accustomed details of the Superman story. Most notably, it takes the hero a while to acquire his traditional suit (rationalized here as Kryptonian formalwear), until which he wears the trademark cape with an insignia-blazoned t-shirt, blue jeans, and work boots. Clark Kent isn’t working for The Daily Planet, but rather for its muckraking rival the Star, which makes him and Lois Lane full professional competitors. In these first eight issues, Morrison hasn’t even started to ramp up the amorous tension between Lois and Clark/Superman, although she’s certainly excited by the hero.

This story arc starts from the beginning of Superman’s crime-fighting career, making him a righteous vigilante on the wrong side of the corrupt establishment. And it sketches in the full origin story with the retrospective issue “Rocket Song” and the back-up features “Baby Steps” and “Last Day.” The first six issues are the real “Men of Steel” arc, while the last two are the aforementioned “Rocket Song” and an episode involving emissaries of a future Legion of Superheroes, “When Superman Learned to Fly.”

Ongoing villains include a Lex Luthor who, like Superman, is a bit less puissant than the Silver Age version of the character. The Collector of Worlds turns out to be a reinvention of a classic Superman nemesis. There is a “little man” working persistently behind the scenes for Superman’s downfall, and he is not much explained, but he is able somehow to muster the “Kryptonite Men” who are prosecuting a vendetta against Superman, seemingly from the future.

The thing about the Superman franchise is that it’s heavy. I mean, it has accumulated so much weight, so many precedents and expectations, and the hero himself is so presumptively stolid that it’s not easy to get readers engaged. But like Newtonian physics demands, a creative team that can get that ponderous weight in motion can deliver a compelling force. Having read this volume on loan from my local public library, I expect to go on to further ones. [via]