Hands of Apostasy: Essays on Traditional Witchcraft, edited by Michael Howard and Daniel A. Schulke, in special and standard hardcover editions from Three Hands Press, and available for pre-order now, may be of interest. 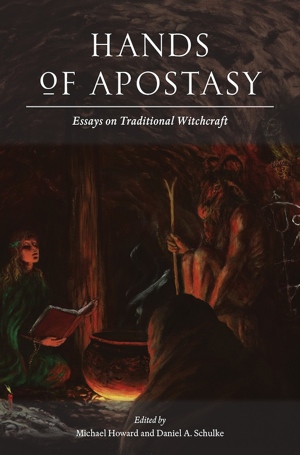 “Old-style Craft, also known as traditional witchcraft, endures as a distinct body of archaic magical practices in present-day Britain, North America and Australia. Originally nameless, such bodies are related to a variety of historical magical streams, most notably the practices of the Grimoires or ‘black books’, folk-healing, and popular magic of the early modern era. Typically, such groups operate in secret, with strict means of initiatic succession, and practice sorcery characterized by a dual ethos of healing and harming. Though an internally contentious issue, the word witch is accepted as a descriptor for practitioners of this art, as is anti-witching for practices of removing curses and binding magical malefactors.

Though still obscure, even in occult circles, the variety and idiosyncrasy of Old Craft traditions is remarkable. The witches of Cornwall, with their corpora of folk charms and blessings, are one such phenotype. The Pickingill Craft as described by E.W. Liddell, remains despite its controversy one of the most unique and potent Craft persuasions, as do the teachings and practices of Robert Cochrane, founder of Clan of Tubal Cain. The Manx Old Order, the Skull and Bones tradition of Pennsylvania, and the Cultus Sabbati, with the medieval Witches’ Sabbath as an important organizing principle, are yet other distinctive traditions.

Hands of Apostasy is a groundbreaking witchcraft anthology presenting nineteen articles written by both scholars and practitioners, addressing such crucial Old Craft topics the Devil, Initiation, the relation of witchcraft to the grimoire corpus, the mysticism and magic of herbs, folk-charming, the nocturnal flight, the Romantic movement, the witches’ cauldron, and the powers of moon and tide. Representing widely-varying witchcraft traditions and perspectives, the book is a sound testament to the Craft’s history, diversity and strength, as well as the characteristic marks of an evolving and contemplative tradition. A complete list of essays and authors is found at right.

The work is profusely illustrated with a specially-commissioned set of illustrations by renowned Finnish engraver Timo Ketola, pleasing both sensus and spiritus. In his darkly opulent style evocative of nocturnal tableaux and forlorn landscapes, Mar. Ketola’s work for Hands of Apostasy is a stunningly original addition to the iconography of the witch. In conjunction with the book release we are also offering a limited edition print of Timo Ketola’s LUCIFER.”

“Authors and Essays
The Magic of History: Some Considerations
Andrew Chumbley

Killing the Moon:
Witchcraft Initiations in the Mountains of the Southern United States
Corey Hutcheson

The Man in Black
Gemma Gary

Where the Three Roads Meet:
Oneiric Praxis in the Sabbatic Craft
Jimmy Elwing

The Blasphemy of Things Unseen
Daniel A. Schulke