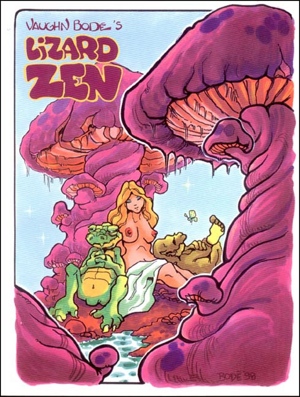 This volume of Vaughn Bodē comix is pretty purely miscellany, featuring the plotless five-page “Lizard Zen” as its centerpiece. Bodē was a pioneer of underground comix, and as editor Marc Arsenault notes, Bodē’s work (coming to a too-early end in 1975) has been an enduring influence on the entire medium of art graffiti.

The presence of human titties and lizard peckers is strictly for yucks here; there’s nothing arousing about them. The art is vigorous while the stories tend toward the futilitarian absurd. I couldn’t make heads or tails out of the gobbledigook-scripted “Gline.” I felt like many of the topical references passed me by, especially in the Douglas Recording advertisements. But the science fiction parable “The Rudolf” was quite chilling in light of our 2014 “lone wolf” mass shootings.

All in all, this isn’t the cream of Bodē’s work, but it is representative and highly varied. [via]