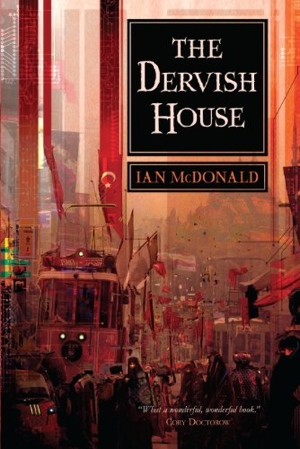 The Dervish House is a novel of the sort that Ian McDonald is best known for: science fiction set in the mid-21st century in a technologically developed metropolitan culture outside of the self-regarding “First World.” In this case, the setting is Istanbul: a city of both the East and the West, where the past and the future converge in terrorist espionage, nanotech-induced mysticism, quests for religious antiquities, and an Enron-style financial scandal, all over the course of a week at the climactic end of an oppressive summer heat.

As is typical for McDonald’s novels, five or more principal characters feature in their own narrative threads that coexist in a shared system of events, only very gradually coming to cross and tie with each other. There are mature nostalgia and regret, adult striving and passion, and the adventures of a Boy Detective.

I had expected a lot from this book, having previously enjoyed other work by the author, and knowing that this was a recent and well-regarded accomplishment. I was not disappointed. [via]