He built many castles in the air, and peopled them with secret tribunals, and bands of illuminati, who were always the imaginary instruments of his projected regeneration of the human species. 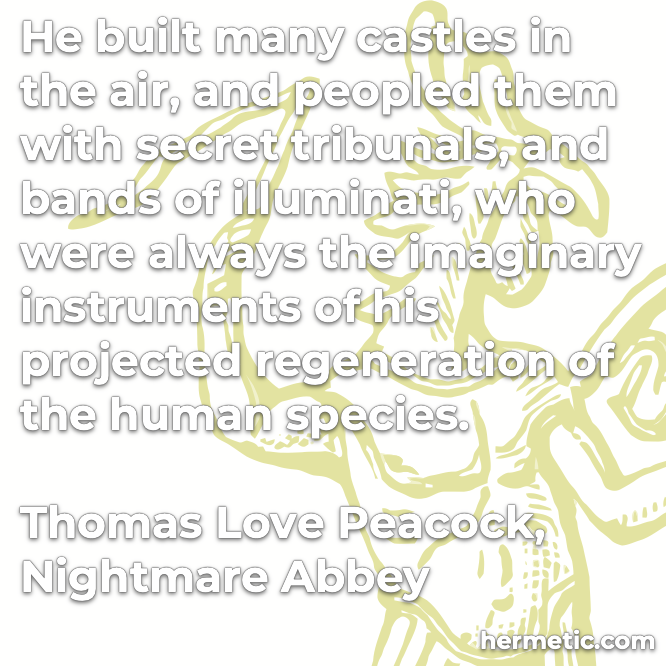 “All that has happened in the third degree is that he has symbolically passed through a great and striking change: a rebirth, or regeneration of his whole nature. He has been ‘sown a corruptible body’; and in virtue of the self-discipline and self-development he has undergone, there has been raised in him ‘an incorruptible body,’ and death has been swallowed up in the victory he has attained over himself.” [via]

“To state things briefly, Masonry offers us, in dramatic form and by means of dramatic ceremonial a philosophy of the spiritual life of man and a diagram of the process of regeneration.” [via]

“I was with a number of Hermetists, and one of them said to another, ‘Do you see something in the curtain?’ The other gazed at the curtain for a while and saw presently a man led through a wood by a black hound, and then the hound lay dead at a place the seer knew was called, without knowing why, ‘the Meeting of the Suns,’ and the man followed a red hound, and then the red hound was pierced by a spear. A white fawn watched the man out of the wood, but he did not look at it, for a white hound came and he followed it trembling, but the seer knew that he would follow the fawn at last, and that it would lead him among the gods. The most learned of the Hermetists said, ‘I cannot tell the meaning of the hounds or where the Meeting of the Suns is, but I think the fawn is the Morning and Evening Star.’ I have little doubt that when the man saw the white fawn he was coming out of the darkness and passion of the world into some day of partial regeneration, and that it was the Morning Star and would be the Evening Star at its second coming.” [via]

I. His Ruling Ideas from The Philosophy of Shelley’s Poetry in Ideas of Good and Evil by William Butler Yeats.

“He does not believe that the reformation of society can bring this beauty, this divine order, among men without the regeneration of the hearts of men.” [via]