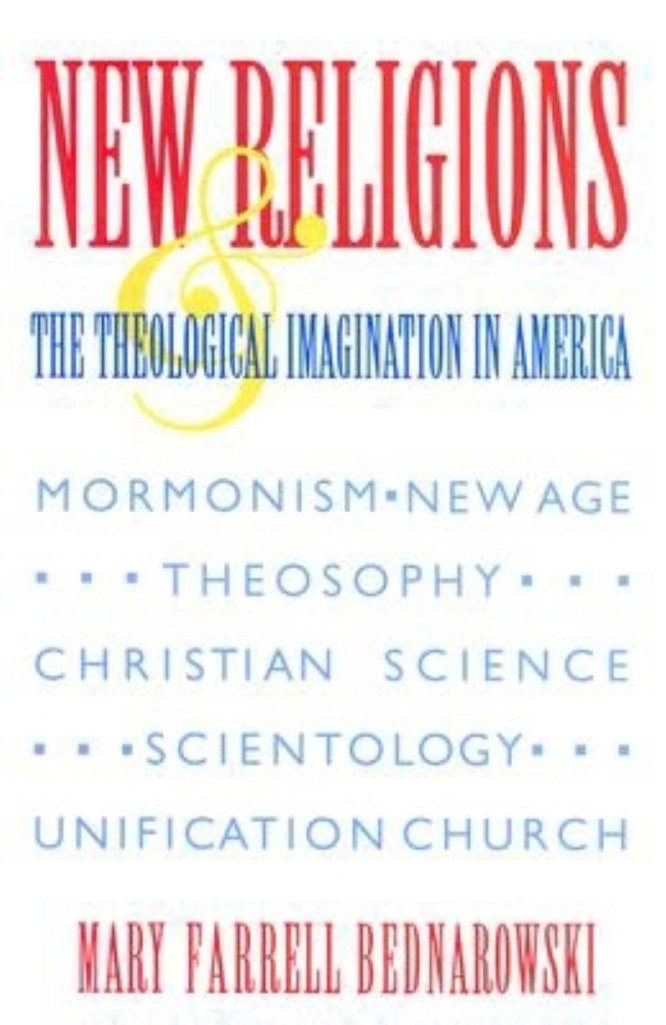 In this monograph Mary Ferrell Bednarowski examines a half-dozen religions of variously “alternative” status, inquiring into their different conclusions regarding traditional theological topics such as the character of the divine, the nature of humanity, human existence after death, and the cornerstones of ethical reflection. Her six example religions are carefully chosen, not only to illustrate a profound variety, but also to demonstrate some parallels: three originated in the 19th century and three in the 20th, and she sets the triads up so that each has a match in the neighboring century. The result is as follows:

In the case of the first pair, there is an emphasis on the finitude and anthropic qualities of God, along with the need for human participation in an ongoing historical process of redemption. Both place emphasis on families and marriage as the critical locus of society, and both have engaged alternative notions about marriage in contrast to American mainstream culture.

At first I thought the second pair seemed more alike in name than substance, but it turns out that the early establishment of Christian Science under Mary Baker Eddy was marked by organizational secrecy and centralization to the point of paranoia, quite reminiscent of the Hubbard-Miscavige institution. The similarity of name betrays a shared emphasis on a formalized knowledge that the evident material world is an inaccurate reflection of mental-spiritual reality, which is the real locus of power.

The chief problem here is with the third pairing: the New Age Movement doubtless appeared to have more durable substance in 1989 than it has since demonstrated. But more importantly, it’s not clear that the Theosophy and the New Age Movement are significantly different entities for theological study, since the Theosophical Society and its organizational progeny are reliable entries in any list of groups contributing to the New Age Movement. Bednarowski does show some appreciation for this weakness, but I think she could have still made a respectable case for her larger thesis by substituting Neopaganism for the New Age Movement. In that case, both would emphasize the recovery of wisdom from non-Christian sources, and both include a “magic-positive” outlook that includes the possibility of esoteric initiation. “Theosophy”–taken as a broader milieu than orthodox Blavatskianism–comprehends a considerable range of theologies and organizational approaches comparable to the amplitude of Neopaganism in the late 20th century.

So, while I had been fairly skeptical at the outset, I ended up impressed with the gist of Bednarowski’s pairings. The upshot is that since there is no direct doctrinal influence of Mormonism on the Unification Church, or of Christian Science on Scientology (or, in my proposed revision, of Theosophy on Neopaganism), she has identified three distinct–though not necessarily exhaustive–varieties or types of “theological imagination” among “new” religions.

Curiously, she doesn’t name these three species. I was reflecting on how I might reference them, when it struck me.