Here’s an excerpt of chapter 1, “Practice,” from Secret Practices of the Sufi Freemasons: The Islamic Teachings at the Heart of Alchemy by Baron Rudolf von Sebottendorff, introduction and commentary by Stephen E Flowers [also], which is offered at the Reading Room courtesy of Inner Traditions. 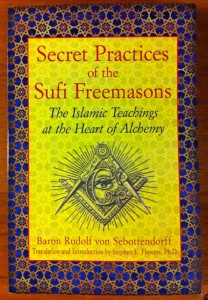 Islam means “submission,” that is, submission to the will of God. The believer can just commend himself to the will of God simply because it is the will of God. He feels secure and does not ask why this is so and that is different—he fulfills the divine law simply because it is the revealed law of God. He accepts his fate as being immutable and, at the most, attempts by means of prayer to implore for mercy from God when the burden becomes too great for him. But the sign of the true believer will consistently be that he does not ask for release from the burden, but rather for the strength to be able to bear it. “Lead us in the way of those who do not err,” the Prophet prescribes to those who pray.

This faithful condition is what is most worthy to strive after, according to all religious systems. Actually he is also the most happy, it is he who the Prophet values most highly, and he represents this as his only goal–and therefore his religion is called Islam.

Now beside the belief there is something else that makes it equally possible for a person to yield to his fate; it is no longer faith but knowledge—knowledge of the divine laws. The one who knows no longer fulfills this law blindly but rather knowingly. The truly wise one is very near to the believer, but he is superior to the believer.

The Prophet created a very wise institution to open the way to knowledge for everyone who truly seeks it. According to this system in the Qur’an he provided explicit signs, which point the way to knowledge, and which have to reveal the law of creation to someone who gains knowledge from within his own being. The highest form of knowledge will always lead the wise to yield to Divine Providence without complaint—that is, to Islam through knowledge.

In what follows we will concern ourselves with this path. How the Prophet himself came into possession of this knowledge is recounted in the form of the following legend.

Not far from Mecca there lived at the time of Mohammed an aged hermit, Ben Chasi, who was teaching the Prophet. When the lesson was over the hermit gave him a metallic plate upon which were engraved formulas, the meaning of which the then thirty-year-old Prophet had just learned. Soon thereafter the hermit died, but Mohammed kept on teaching the secret of these formulas in the most intimate circles. Abu Bekr, the first calif, inherited the plate and the knowledge, which only spread within a small circle after the death of the Prophet: this is the secret knowledge of the oriental Freemasons.

In order to ensure against the loss of the formulas the Prophet distributed them throughout the Qur’an according to a precise key. The key is known, and the formulas are preserved in the Qur’an, such that the possibility remains for reconstructing the system at any time.

The formulas are preserved in the so-called abbreviated letters, the meaning of which is debated among orientalists as well as different commentators. Some are of the opinion that these letters are signatures. Individual Suras certainly originated under highly variable conditions: the Prophet dictated some, others he recited while friends wrote them down, still others were recorded later from memory. When the Suras were collected, the letters, which indicated the originator of the Sura, would have remained, but now without their meaning.

Some European scholars are of the view that these letters represent notes by the scribe. Thus ALM is supposed to mean: amara li muhamed—“Mohammed commanded me to write.”

Arabic commentators view these letters as holy abbreviations. Thus ALM means: allah latif madshid—“God is good.” Or, as another thinks: ana lahu alamu—“I am the God who knows.”

For others the letters are to be interpreted in a kabalistic sense. Certainly all the Suras in which these letters occur contain definite indications that they have something special to say.

The Arabic language, like all the Semitic languages, does not write the vowels. If one does not read these letters as such, but rather as words, they yield no meaning. For this reason people have been scratching their heads over the meaning of these letters. But in actuality these are the secret formulas concealed in the letters that someone who knows the truth can now easily read and pronounce. All of these formulas are compounds of the vowel A with one or several consonants.

The formulas are present in twenty-nine Suras. The number of days results in twenty-five lunar months in which three days are missing. On these three days the one who was dedicating himself to these exercises was occupied doing something else, to which we will return later.

“there is no word which can accurately be translated as ‘Sin’ or ‘Evil,’ in the sense in which these words are generally understood in the religious systems of the West” [via]