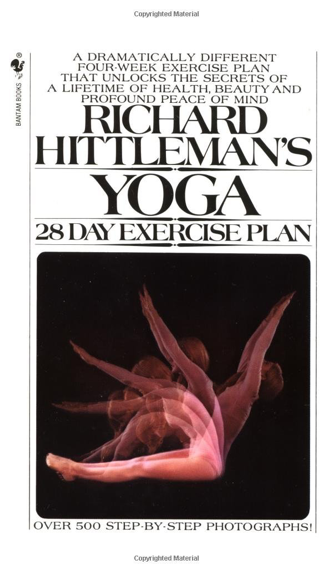 Originally published in 1969, this book is a great way to begin a regular daily practice of Hatha Yoga. Using the standard asanas (postures), Hittleman introduces a few new postures every day and goes over the ones learned on earlier days, adding repetitions, new variations or length of time spent in asana to each one, creating a program that gradually eases you into the practices.

The asanas are liberally depicted in hundreds of photographs and carefully described in detailed text. My biggest complaint with this book is that I wish it were spiral bound so that I could leave it laying open while working on a new posture rather than fumbling with bookmarks or destroying the book by leaving it splayed open on the floor. After working the program for 28 days, you have theoretically laid the groundwork for a new habit. The book concludes with three programs of asanas, meant to be alternated daily. Unfortunately, I’ve found it far easier to work through the daily part of the book than to stick with the three alternating routines and so I have gone back to this book over and over, trying to build the habit again. Be warned that, despite Hittleman’s assurances, the hardest work begins when you’ve finished this book.