The Message of the Sphinx: A Quest for the Hidden Legacy of Mankind by Graham Hancock and Robert Bauval, from Three Rivers Press, is part of the collection at the Reading Room. 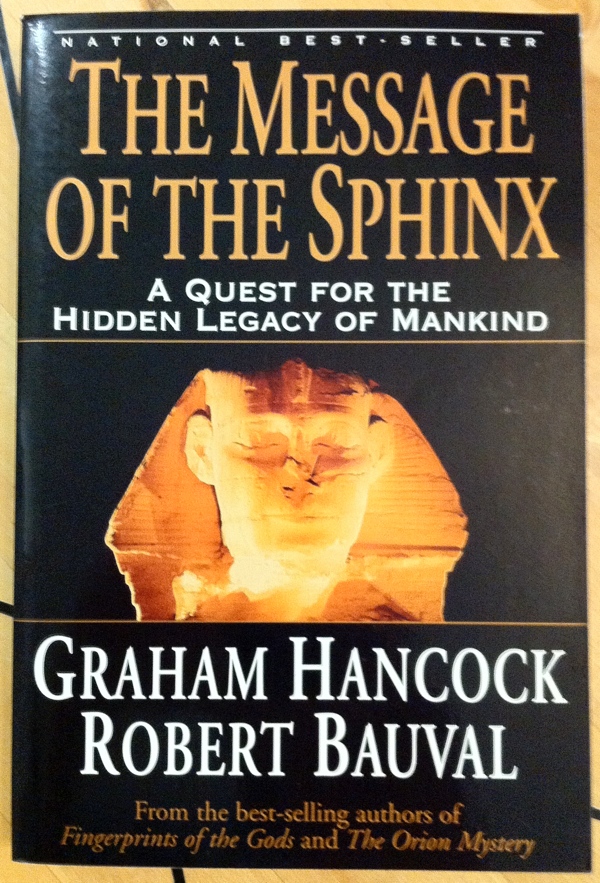 “Guardian of the ancient mysteries, the keeper of secrets … For thousands of years the Great Sphinx of Egypt has gazed toward the east, its eyes focused on eternity, reading a message in the stars that mankind has long forgotten. And today, our civilization stands poised at the end of a great cycle, it is a message that beckons insistently to be understood.

All the clues are in place. Geology and acheo-astronomy have already indicated that the lion-bodied Sphinx may be vastly older than Egyptologists currently believe, dating not from 2500 B.C., but from 10,500 B.C.—the beginning of the astrological Age of Leo. And we now know that the three pyramids of Giza, standing on high ground half a mile to the west of the Sphinx, are in fact a precise map of the three stars of Orion’s belt, formed in 15 million tons of solid stone.

Are these monuments trying to tell us something? And, if so, what?

In The Message of the Sphinx, Robert Bauval and Graham Hancock present a tour de force of historical and scientific detective work that unravels the millennial code embodied in these structures. Using sophisticated computer simulations of ancient skies, they unravel the riddle of the Sphinx, and they present a startling new theory concerning the enigmatic Pyramid Texts and other archaic Egyptian scriptures.

Their discoveries lead the authors to this question: Does mankind have a rendezvous with destiny—a rendezvous not in the future, but in the distant past, at a precise place and time?

The secrets can be kept no longer. The Message of the Sphinx brings them to light.” — back cover