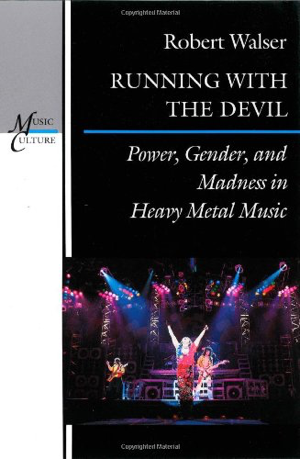 This scholarly monograph regarding heavy metal music and culture deserves the praise it has received from academics and journalists alike. It is methodologically clear, intellectually responsible, enthusiastic, and insightful. Since it was written at the cusp of the 1990s, it only covers the first quarter century or so of the music and its subculture. It is now more of a historical study, since the metal scene has shifted and (to some extent) diversified in the subsequent decades. The late 1980s were probably a high point for heavy-metal-as-such in terms of its popular accessibility and influence, so this illuminating book is certainly worth the attention of any reader interested in the topic.

The first chapter is the one in which Walser spends the most time grappling with prior evaluations of heavy metal, and it is a pleasure to see him dismember the judgmentalism and dismissive caricatures that dominated the critical discourse to that point (and even since, alas). But he doesn’t let pass shoddy work even by scholars sympathetic to to the subculture, such as sociologist Deena Weinstein.

A musician himself, Walser points out repeatedly that considerations of the music ought to be concerned with the music, rather than treating it as noise obstructing the signal of social dynamics or cultural signification. To understand the social effects or cultural substance of a sort of music, he rightly insists, involves a discursive approach to the musical sounds and the idioms and rhetorics to which they contribute, how they interact with lyrical texts, and how they affect listeners. Walser goes to the trouble to reproduce music scores for chief examples through much of the book, and these are fascinating. But I felt the need to supplement them with repeated turns to YouTube, where both live-performance and studio versions of the various songs that he discusses are easily available in audio.

The “Power, Gender, and Madness” of the subtitle reference the third, fourth, and fifth chapters respectively. “Power” references a central identifier of heavy metal’s auditory quality, but also the notion of virtuosity that Walser traces in the work and self-characterization of the musicians. This chapter supplies a number of provocative comparisons with “classical” music, and these are fully grounded in the conscious understandings of many heavy metal musicians.

Walser observes that the fan base for heavy metal transitioned over the course of the 1980s from a thorough sausage fest to a state of rough gender parity. He readily acknowledges the patriarchal overtures of heavy metal bands and songs, while refusing to divorce them from the context of a larger patriarchal culture. He discusses distinctive gender tropes in heavy metal—exscription, misogyny, romance, and androgyny—as reactions to that context.

The final chapter, which treats themes of madness and the occult, is Walser’s venue to respond to moralistic crusaders against heavy metal, just as the first allowed him to engage intellectual and aesthetic critics. He demonstrates handily enough, I think, that metal musicians and fans are more often than not using the music to air their own moral outrage, rather than merely frolicking in some sort of moral void. Although this chapter ends on a powerful note, there is no final summing up of the book as a whole.

A couple of appendices present “Heavy Metal Canons” (as determined by Hit Parader magazine) and the questionnaire used by Walser when contacting fans for his field research. [via]