Hermetic Library fellow T Polyphilus reviews The Shadow Club: The Greatest Mystery in the Universe—Shadows—and the Thinkers Who Unlocked Their Secrets by Roberto Casati. 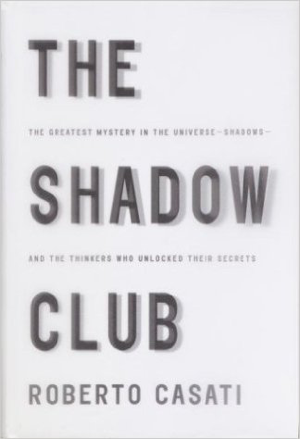 This engaging book is written at a mature level of verbal sophistication, but presumes a philosophically and mathematically inexpert reader. For example, author Casati explains Plato’s Myth of the Cave in a way that clearly assumes the reader will have had no acquaintance with it.

The bulk of the book surveys a history of science trained on shadows, and the resulting contributions to geography, astronomy, and other disciplines. It also draws on psychology of cognition and perception in an effort to understand what shadows are and why people interact with them in the ways that they do. There is no mention of the Jungian notion of the shadow archetype. Still, Casati does touch on the uncanniness of shadows, and the extent to which they elude our conscious object inventories and categories.

Despite the title, the book features no “club” as such, but presents a long string of personalities throughout history who were scientifically and philosophically engaged with shadows. Also, in later chapters, it includes a good bit of art history. Although Casati calls the 17th century—however metaphorically—the era of “the shadow wars,” I never got a clear sense of opposing sides in the alleged conflict.

After exploring the evolution of solar timekeeping, Casati mentions, “If you open up a wristwatch, under the face you’ll find balance wheels and gears. If you open up a sundial, you’ll find a planet and its star” (86-87). I can recommend this section of the book in particular to practitioners of (or aspirants to) Batrachophrenoboocosmomachia. The Shadow is in the Light, not the light in the Shadow. Worship then the Shadow, and behold my light shed over you. [via]