Deeply hidden characteristics in other souls can be perceived by this organ, but their truth depends on the attainment of immunity from the above-mentioned illusions. For this purpose it is necessary that the student should control and dominate everything that seeks to influence him from outside. He should reach the point of really receiving no impressions beyond those he wishes to receive. This can only be achieved by the development of a powerful inner life; by an effort of the will he only allows such things to impress him to which his attention is directed, and he actually evades all impressions to which he does not voluntarily respond. If he sees something it is because he wills to see it, and if he does not voluntarily take notice of something it is actually non-existent for him. 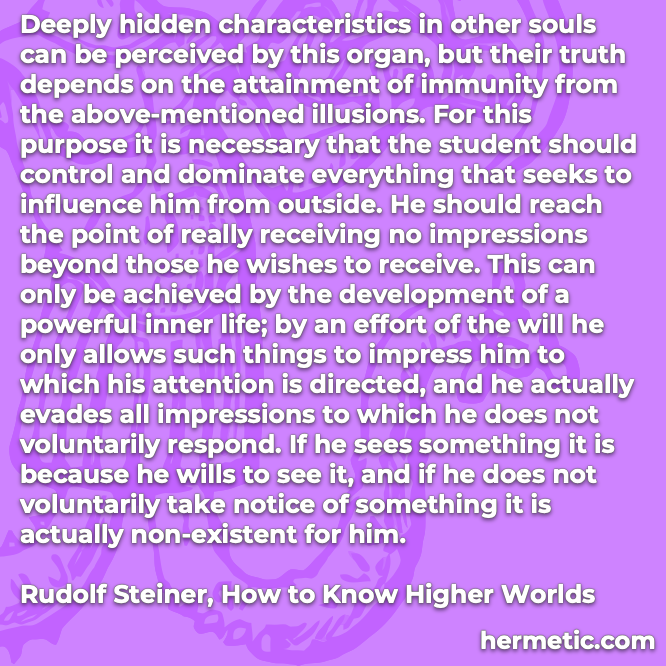 For in penetrating to the higher mysteries he will see things which are concealed from ordinary humanity by the illusion of the senses. If the physical senses do not allow us to perceive the higher truth, they are for this very reason our benefactors. Things are thereby hidden from us which, if realized without due preparation, would throw us into unutterable consternation, and the sight of which would be unendurable. 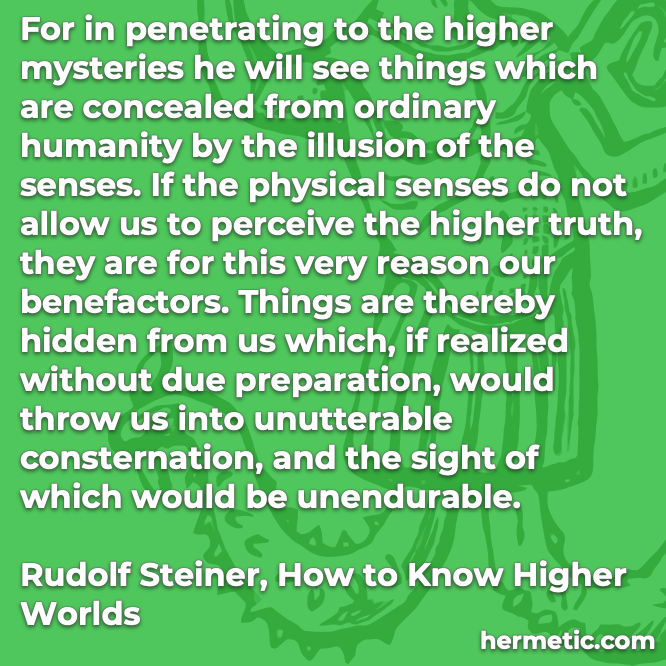 To live in the sense of these great cosmogonies means to work for the attainment of personal spiritual perfection. Only by so doing can man become a servant of the world and of humanity. Self-perfection is by no means self-seeking, for the imperfect man is an imperfect servant of the world and of humanity. The more perfect a man is, the better does he serve the world. “If the rose adorns itself, it adorns the garden.” 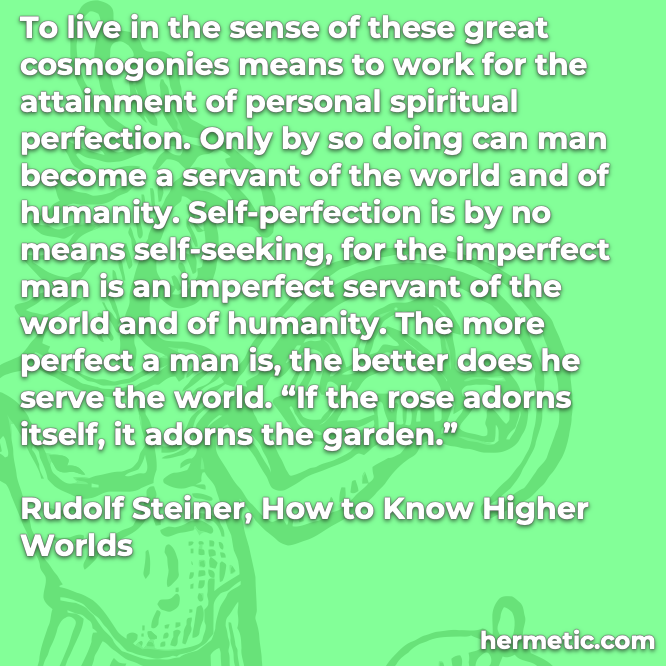 The would-be initiate must bring with him a certain measure of courage and fearlessness. He must positively go out of his way to find opportunities for developing these virtues. His training should provide for their systematic cultivation. 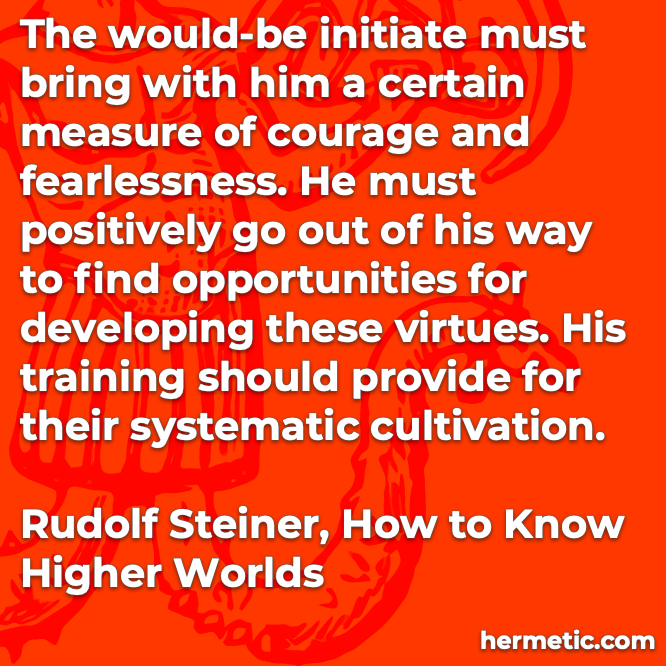 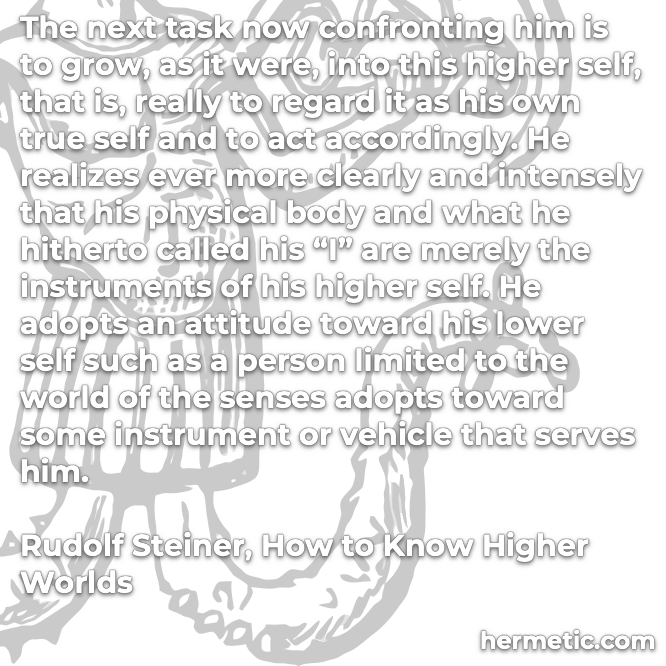 An unhealthy life of thought and feeling will not fail to obstruct the path to higher knowledge. Clear, calm thinking, with stability of feeling and emotion, form here the basis of all work. Nothing should be further removed from the student than an inclination toward a fantastical, excitable life, toward nervousness, exaggeration, and fanaticism. 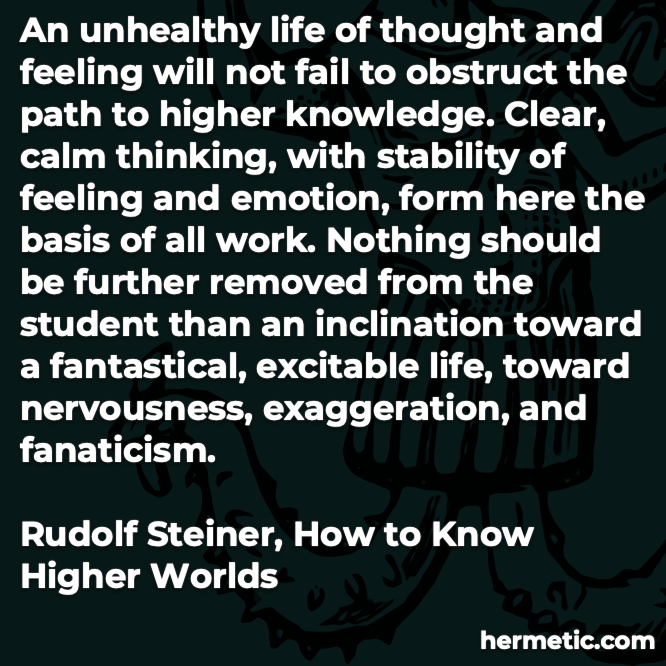 one precaution is necessary, failing which it were better to leave untrodden all steps on the path to higher knowledge. It is necessary that the student should lose none of his qualities as a good and noble man, or his receptivity for all physical reality. Indeed, throughout his training he must continually increase his moral strength, his inner purity, and his power of observation. 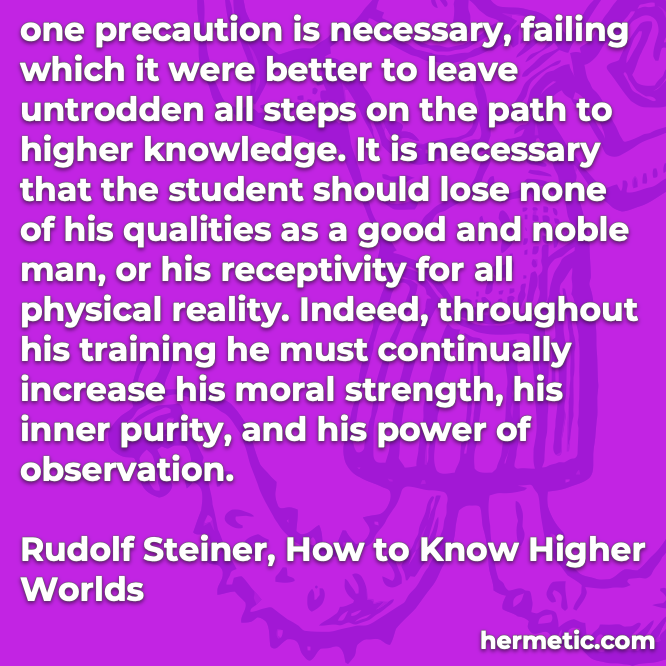 No one can give birth to a soundly constituted higher self whose life in thought and feeling, in the physical world, is not sound and healthy. 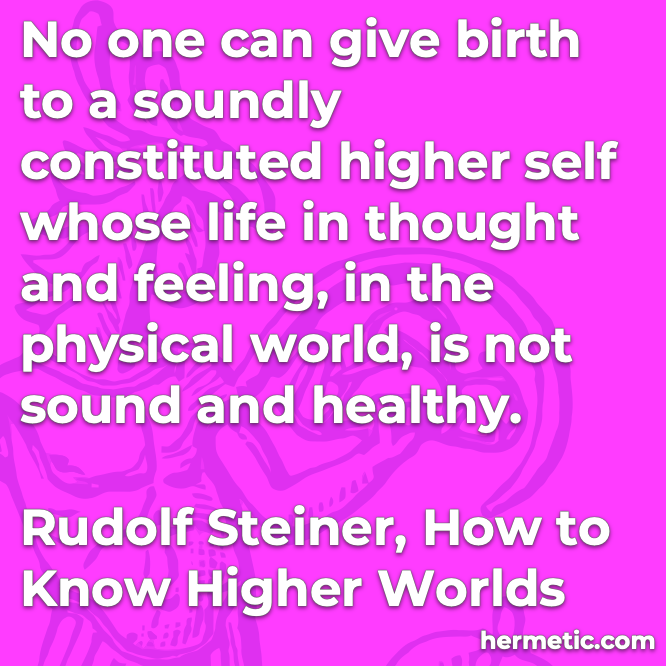 This small book contains a series of essays first published in the German-language Theosophical organ Lucifer-Gnosis during the first decade of the twentieth century. According to the preface by Steiner’s widow, the series, which took as its point of departure the text of Knowledge of the Higher Worlds and Its Attainment, was aborted by the cessation of Lucifer-Gnosis and the transfer of Steiner’s organizing efforts to his new vehicle Anthroposophy.

The stages invoked in the title are Imagination, Inspiration, and Intuition, corresponding in Theosophical jargon (not much used here) to the Astral, Etheric, and Causal planes. This sequence involves increasing abstraction from the empirical world of matter, along with a refinement of psychic processes and a turning-inward of the senses. A certain amount of implied standardization in this account may be misplaced. For example, Steiner writes that “Astral beings can also be ‘tasted’ or ‘smelled.’–Only what constitutes in the actual sense the physical element of tone and sound is almost wholly lacking in the real imaginative world” (51). Yet in one of the most significant visionary accounts from Steiner’s own period, it is written: “And there cometh an interior voice, which sayeth to the seer that he hath trained his eyes well and can see much; and he hath trained his ears a little, and can hear a little; but his other senses hath he trained scarcely at all, and therefore the Aethyrs are almost silent to him on those planes” (Liber CDXVIII, 4th Aethyr).

Both the preface by Marie Steiner and a supplementary piece of front matter by Rudolf Steiner–the latter copied from the preface of the 1914 reissue of Knowledge of the Higher Worlds–are concerned to mitigate and downplay these articles’ emphasis on the importance of firsthand instruction from an accomplished occult practitioner. Even in the body of the original text, this issue is raised with some sense of tension:

“As has been frequently mentioned, it is owing to the special conditions of our time that these things are and must be published. But also, on the other hand, it must be ever again emphasized that while it has thus been made easier to acquire occult knowledge, sure guidance through an experienced occult teacher is not yet to be dispensed with.” (46)

That “yet” suggests that Steiner was already looking forward to the position taken in the later writings of the front matter, where he hopes that an occult mentor “will assume the same position in spiritual schooling as a teacher occupies, in conformity with modern views, in any other field of knowledge” (xiv). Still, if my experience is any guide, the autodidact in occultism is at a great disadvantage compared to those with personal instruction and proper initiation. The traditional emphasis on a preceptor is understandable, even if it carries its own hazards in a secular world where authentication of such figures is bound to be dubious. [via]

The signs of the occult script are not arbitrarily invented; they correspond to the forces actively engaged in the world. They teach us the language of things.