Had nature taken her course, I should probably now be sleeping in a quiet grave—and my soul might be in the regions of the blessed. But the tempter came, and dazzled me with prospects of endless happiness—and I succumbed! Will there be a day when someone discovers the secrets of these supernatural events, that reflection of the shadow of the soul that manifests itself between awakening and sleep, in a state of purgatory and unconsciousness? 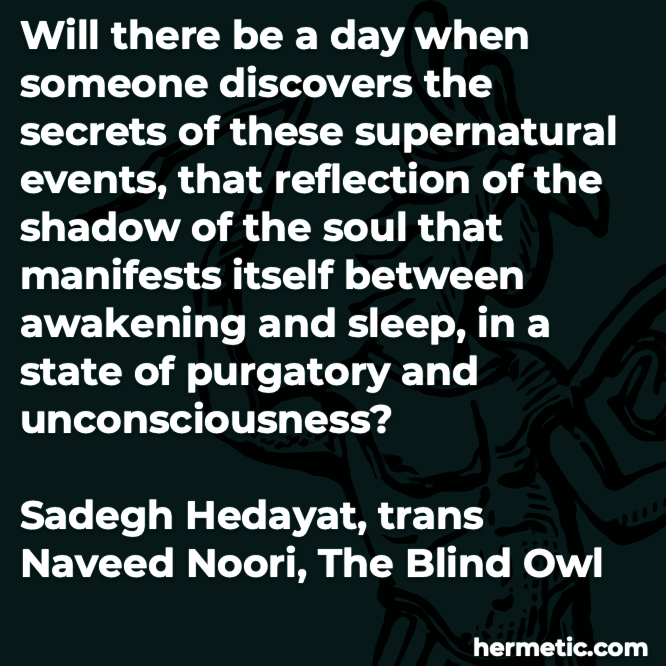 Who may know his complete likeness, so much being hidden? The Astrals, Elementals, Mind, Soul? We realize something of the body’s mechanism and of the affectiveness of the whole; at its interrelations we may only guess. Every fact gleaned shows us merely greater ignorance of ourselves. Therefore, speak not of God, speak for yourself alone, for when you know yourself you will know your gods. 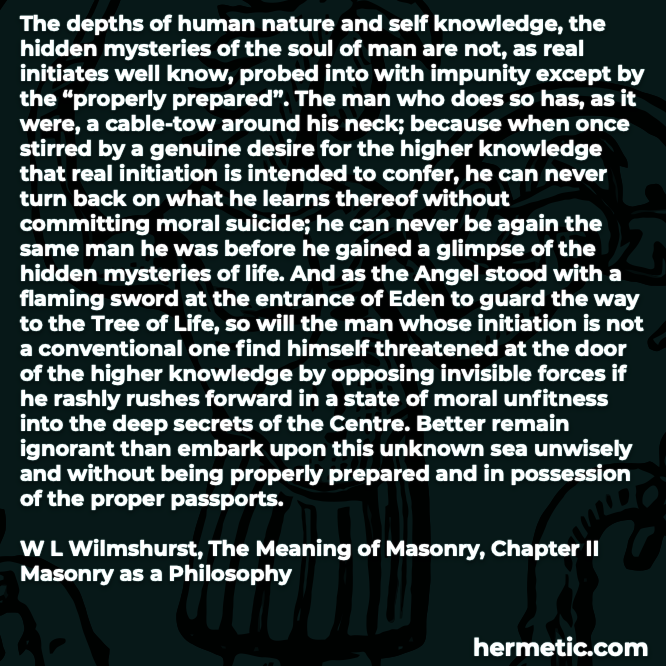 In the tower, the magician works rituals that prepare his soul, making it receptive to daimonic inspiration. 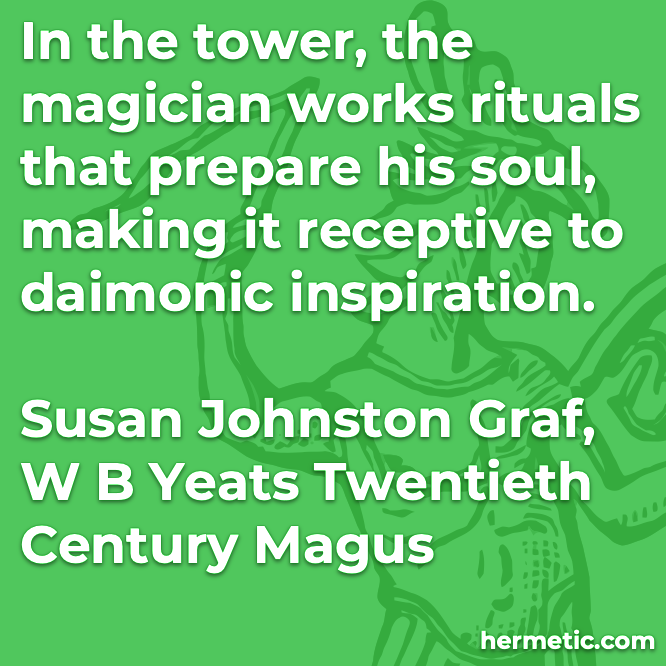 We should therefore attempt to remove all external impediments which are in the way of our spiritual development and live in a state of purity. Our thoughts should be continually directed inwardly and within ourselves; for within ourselves is the element of consciousness, knowledge, and power. Nothing hinders us to develop and exercise our own powers, except our misconceptions, imaginations, and external desires. Therefore the divine influences will only come to him who liberates his soul of all such hindrances, carnal desires, prejudices, and hallucinations. A diseased eye cannot bear to look at the light; an impure soul is repulsed by the divine light of truth. 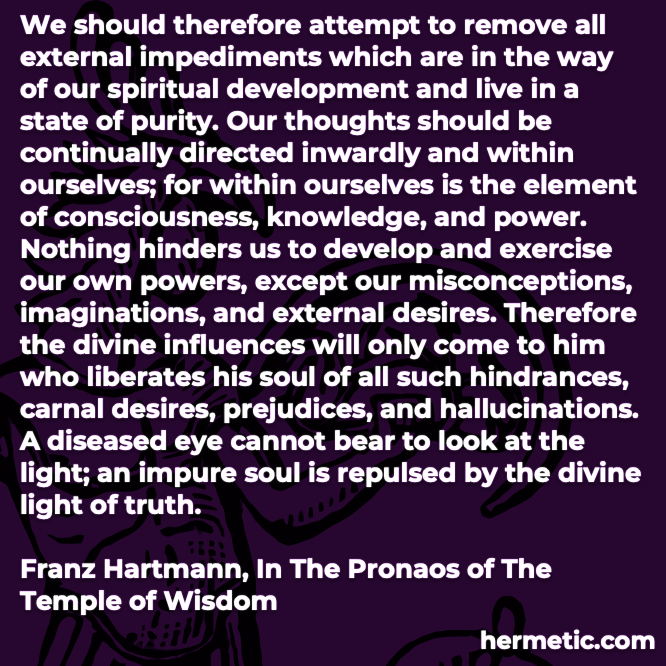 Porphyry ridicules the idea that gods, being wiser, more powerful, and superior to man, could be coaxed, persuaded or forced to do the will of man or conform to his desires. He repudiates the theory that clairvoyance, prophecy, etc., were the results of the inspiration by external gods, but says that they are a function of the Divine Spirit within man; and that the exercise of this function becomes possible when the soul is put into that condition which is necessary to exercise it. “The consciousness of man may be centred within or beyond his physical form; and according to conditions a man may be, so to say, out of himself or within himself, or ‘in a state in which he is neither wholly without nor within, but enjoys both states at once.” He also states that there are many invisible beings, which may take all possible forms and appear as gods, as men, or as demons, that they are fond of lying and masquerading, and of pretending to be the souls of departed men.

Franz Hartmann, In the Pronaos of the Temple of Wisdom 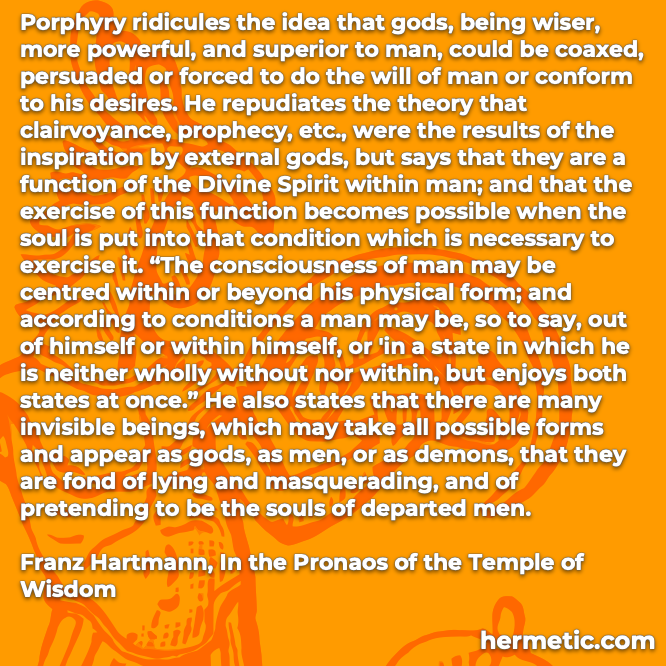 For I must pass
Desolate into the dusk of things again,
Having risen so far to fall to the abyss,
Deeper for exaltation; I must go
Wailing and naked into the inane
Cavernous shrineless place of misery,
Forgetful, hateful, impotent, except
The last initiation seize my soul,
And fling me into Isis’ very self,
The immortal, mortal. such is the holy gift of the Muses to men. For it is through the Muses and far-shooting Apollo that there are singers and harpers upon the earth; but princes are of Zeus, and happy is he whom the Muses love: sweet flows speech from his mouth. For though a man have sorrow and grief in his newly-troubled soul and live in dread because his heart is distressed, yet, when a singer, the servant of the Muses, chants the glorious deeds of men of old and the blessed gods who inhabit Olympus, at once he forgets his heaviness and remembers not his sorrows at all; but the gifts of the goddesses soon turn him away from these. 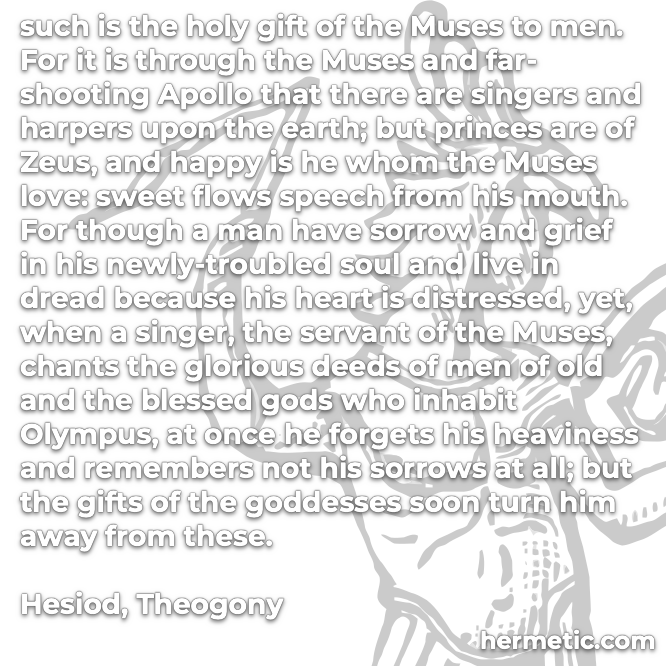