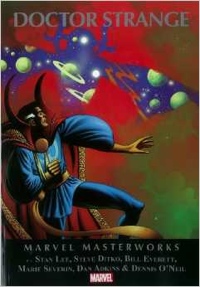 The issues of Strange Tales that furnish the contents of this reprint volume were published in 1966-1968. They begin with Steve Ditko art, which — alas! — soon vanishes. I am not a fan of the corny style of Bill Everett, although Marie Severin’s work on the title was passable.

The writing throughout is mostly from Stan Lee, and it is bombastic and ridiculous. I rather liked the multi-issue Roy Thomas / Stan Lee plotline that might have been titled “There Was an Old Woman Who Swallowed a Fly.” The world is imperiled by some mystic menace, so Doctor Strange must unleash an even greater one to keep it at bay: rinse, cycle, and repeat. Also good for laughs are the later numbers written by Jim Lawrence. They feature Strange’s unmotivated quasi-romantic championing of the miscellaneous Victoria Bentley, to say nothing of her being arbitrarily chosen for extraterrestrial ravishment by Yandroth, Lord of Technology!

Reading back over this early material leaves me impressed with just how far the comic book representations of occultism have come in my lifetime. Granted, Doctor Strange is nowhere near the leading edge of them these days, but he was then! [via] 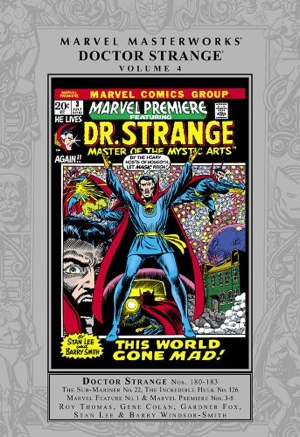 Neil Gaiman, Clive Barker, Garth Ennis, Stan Lee and others talk about the Devil back in 1993. [via]