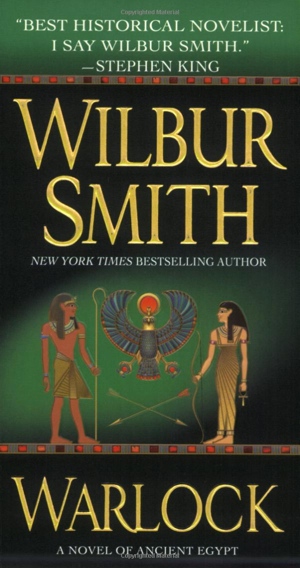 This sequel to River God has the same protagonist, the eunuch-sage Taita, but is set a generation-and-a-half after its predecessor in ancient Egypt. It has all of the drama of the first book, often in double helpings. As the title suggests, however, Taita’s magic in this book is actual supernatural sorcery, instead of just cutting-edge bronze-age technology as it had been before. Now an elderly and famous figure, Taita continues in his role of mentor to Egyptian royalty and foiler of usurpations.

Author Smith writes with excellent pacing and provides vivid characters, but sometimes his prose falls a little flat. After he mentioned “the divine presence of the god,” (281) I was ready to encounter “the wet presence of water.” There’s plenty of violence, including some bracing gore, and lots of sex (for a novel that’s not really about the sex, as such).

Overall, I liked this second volume a little better than the first. The two could be read in either sequence without significant confusion or spoilers, although the first does set up the context of the Hyksos domination of lower Egypt that the second takes for granted. Since I had liked River God without being smitten with it, an extra impetus was required to get me into Warlock, in fact. That goad was provided by my recent enthusiasm for the tabletop game Kemet, and I was well-pleased to find that Warlock matched the spirit of that game quite neatly. [via]