Magdalene Meretrix reviews The Magician of the Golden Dawn: The Story of Aleister Crowley by Susan Roberts in the Bkwyrm archive. 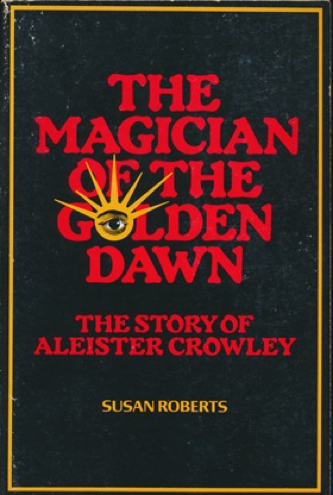 Though this biography of Aleister Crowley is written in the style of a fictional novel, Roberts took great pains to avoid putting words in Crowley’s mouth. Roberts spent five years researching every available aspect of Crowley’s life. She interviewed Israel Regardie and Gerald Yorke. She read through the Yorke collection at the Warburg Institute – spending over five hundred hours reading the letters, diaries, typescripts and other unpublished materials contained in the collection. She travelled to Scotland to visit Crowley’s home, Boleskine. Finally she showed her finished product to Israel Regardie who wrote a foreword for her book, stating therein, “I am most impressed by Susan Robert’s portrayal of Crowley the man. It is an exciting book. Once begun, I rather fancy the reader will have considerable difficulty putting it down.”

I would have to agree with Regardie’s assessment. From the moment I picked up The Magician of the Golden Dawn I could do nothing else until I had finished the entire book. There were tender moments, embarrassing moments, victorious moments and tragic moments of Crowley’s life depicted in Roberts’ book. Robert’s writing style is captivating. I really felt as if I were reading about a living breathing human being.

Though Roberts writes in a novelistic style, none of the dialogue is manufactured. According to Roberts, “There is not a word of dialogue in this book that Crowley himself did not write or say.” In attempting to stay as close to the truth as humanly possible, Roberts portrays a man who was sometimes ‘saint,’ sometimes ‘sinner’ but always a genius. At times his genius seems to be masked by poor judgement, but never is he deified or vilified by Roberts.

Roberts even does a good job of explaining some of the basic tenets of Crowley’s philosophy, the Law of Thelema, in a manner comprehensible to the layman. To assist her explications, Roberts includes a short glossary of occult terms as well as a bibliography and index at the end of her book.

I would recommend this book to anyone who wants to read a biography of Crowley that is not based on yellow journalism and sensationalism. Also, unlike Regardie’s excellent biography of Crowley, “The Eye in the Triangle,” this is a breezy read that the average reader should be able to finish in a week or less.