That does sound solid, but remember a system is only as secure as the humans who operate it. 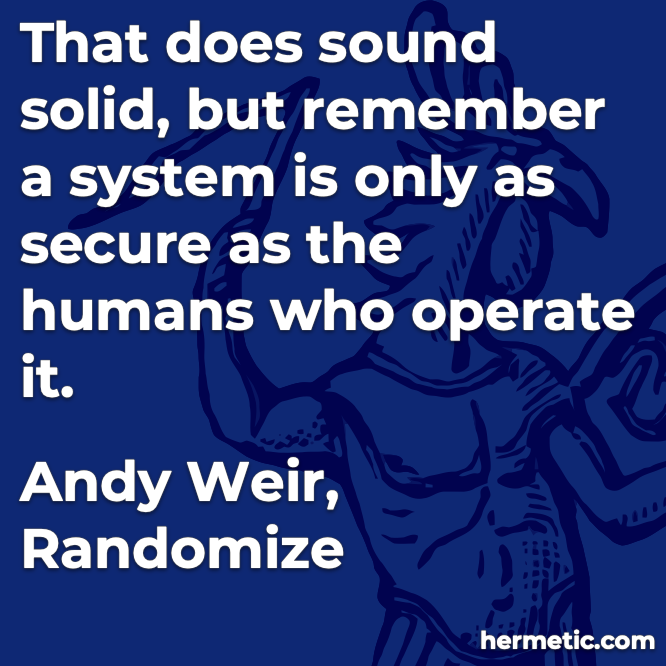 “Now, with regard to German atrocities, they may be perhaps a little more systematic than atrocities on the other side; but that is evidence of more system, not of more ferocity.” [via]

“‘Battle, murder, and sudden death’ is excellent sport, and it is extremely necessary at this moment. The excretory system of nature, pestilence, has been constipated by the misguided efforts of medicine and hygiene.” [via]

“In fact few people stay with any system long enough to realize the genuinely spiritual aspects of the Work they are doing. The need for genuine self-honesty and purification on the level of the ego and the repressed areas of the subconscious, before the refined and powerful forces of the soul can shine freely and effectively through the ego and not be overly distorted by it, must be recognized by students if they are to derive full benefit from the Work they are doing.” [via]

“We shall see presently that that philosophy is not only consistent with the doctrine of every religious system taught outside the ranks of the Order, but that it explains, elucidates and more sharply defines, the fundamental doctrines common to every religious system in the world, whether past or present, whether Christian or non-Christian.” [via]

“There are members of the Craft to whom it is familiar, and who in due time may feel justified in gradually making public at any rate some portion of what is known in interior circles. But ere that time comes, and that the Craft itself may the better appreciate what can be told, it is desirable, nay even necessary, that its own members should make some effort to realize the meaning of their own institution and should display symptoms of earnest desire to treat it less as a system of archaic and perfunctory rites, and more as a vital reality capable of entering into and dominating their lives; less as a merely pleasant social order, and more as a sacred and serious method of initiation into the profoundest truths of life.” [via]