Evil, and mischief, and misery, and confusion, and vanity, and vexation of spirit, and death, and disease, and assassination, and war, and poverty, and pestilence, and famine, and avarice, and selfishness, and rancour, and jealousy, and spleen, and malevolence, and the disappointments of philanthropy, and the faithlessness of friendship, and the crosses of love—all prove the accuracy of your views, and the truth of your system; and it is not impossible that the infernal interruption of this fall downstairs may throw a colour of evil on the whole of my future existence. 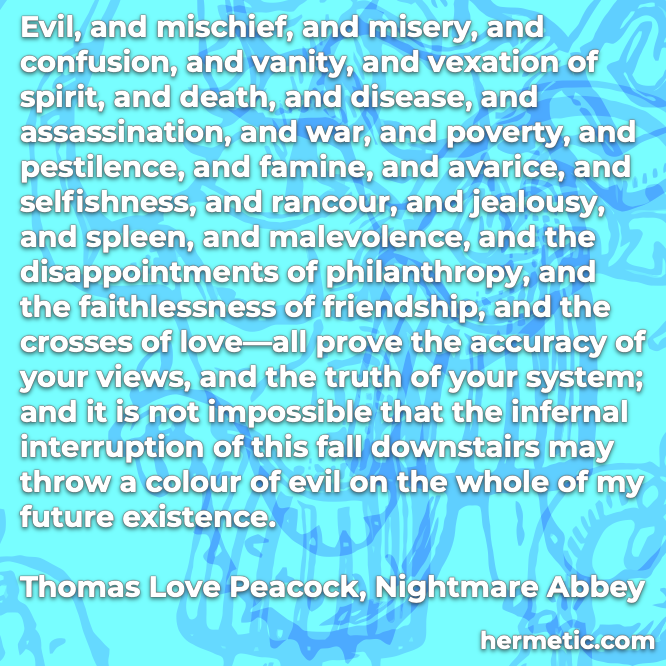 He slept with Horrid Mysteries under his pillow, and dreamed of venerable eleutherarchs and ghastly confederates holding midnight conventions in subterranean caves. 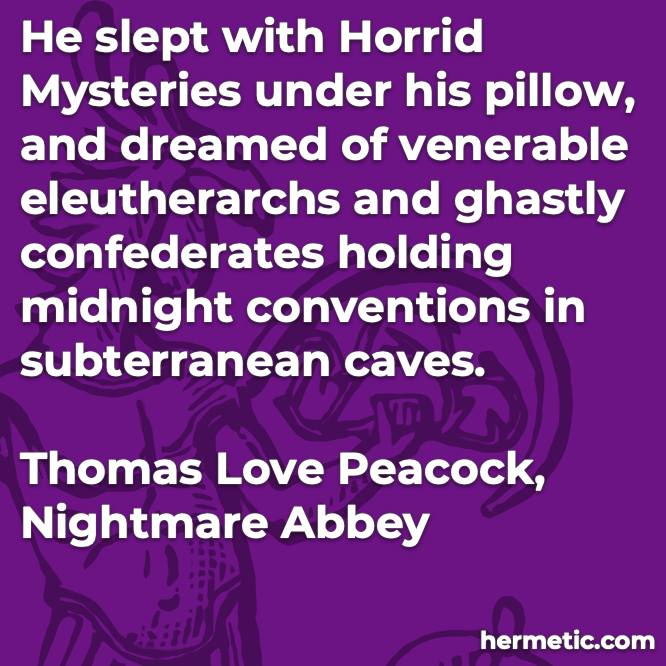 He built many castles in the air, and peopled them with secret tribunals, and bands of illuminati, who were always the imaginary instruments of his projected regeneration of the human species.

If we go on in this way, we shall have a new art of poetry, of which one of the first rules will be: To remember to forget that there are any such things as sunshine and music in the world. 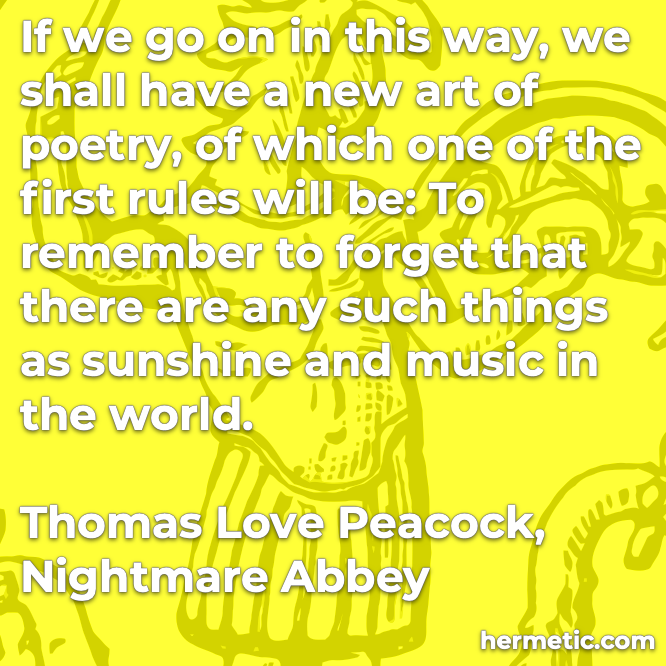 Did our ancestors go peeping about with dark lanterns, and do we walk at our ease in broad sunshine? Where is the manifestation of our light? By what symptoms do you recognise it? What are its signs, its tokens, its symptoms, its symbols, its categories, its conditions? What is it, and why? How, where, when is it to be seen, felt, and understood? What do we see by it which our ancestors saw not, and which at the same time is worth seeing? 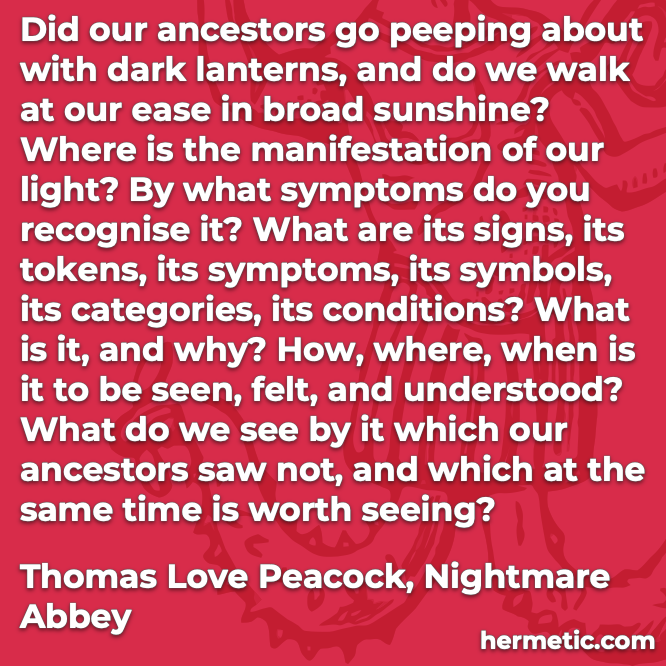 Disappointed both in love and in friendship, and looking upon human learning as vanity, he had come to a conclusion that there was but one good thing in the world, videlicet, a good dinner This gentleman was naturally of an atrabilarious temperament, and much troubled with those phantoms of indigestion which are commonly called blue devils. There’s a dark lantern of the spirit,
Which none see by but those who bear it,
That makes them in the dark see visions
And hag themselves with apparitions,
Find racks for their own minds, and vaunt
Of their own misery and want. As I read Thomas Love Peacock’s Nightmare Abbey, published in 1818, I kept seeing this story in my mind’s eye as a darker Dahl, Tim Burton stop action, Fallen London thingy. It felt like one of those modern period pieces. Surprisingly modern to the point of seeming anachronistic to the setting and the period in which it was actually written.

I quite enjoyed the story for itself but also I went a bit highlight crazy on this one because of all the fun thoughts Peacock had about his Romantic friends and milieu, especially Percy Bysshe Shelley, Mary Wollstonecraft Shelley & al.

There’s a wonderful sense of bedroom farce absurdity here with the comedy of slamming doors in the face of attempts by the main characters to hook up in some combination, though amusingly the idea of a plural arrangement as a solution to the conundrum is actually contemplated, though dismissed. The whole is only more delicious in that it hides a glimpse of how contemporary society, and Peacock, saw the Shelleys.

I enjoyed the author having a fun poke at friends, society and culture around him. And, there are plenty of amusing little digs at the aspirational political science of the age, which at that time was quite heavily flavoured with active and contemporary Illuminati and Rosicrucian groups.

“He began to devour romances and German tragedies, and, by the recommendation of Mr Flosky, to pore over ponderous tomes of transcendental philosophy, which reconciled him to the labour of studying them by their mystical jargon and necromantic imagery. In the congenial solitude of Nightmare Abbey, the distempered ideas of metaphysical romance and romantic metaphysics had ample time and space to germinate into a fertile crop of chimeras, which rapidly shot up into vigorous and abundant vegetation.

He now became troubled with the passion for reforming the world. He built many castles in the air, and peopled them with secret tribunals, and bands of illuminati, who were always the imaginary instruments of his projected regeneration of the human species. As he intended to institute a perfect republic, he invested himself with absolute sovereignty over these mystical dispensers of liberty. He slept with Horrid Mysteries under his pillow, and dreamed of venerable eleutherarchs and ghastly confederates holding midnight conventions in subterranean caves.”

And there is some solid satire about the method of groups like Weishaupt’s Illuminati, which was a contemporary movement when this was written, in spreading the Enlightenment through authoritarian, even paternal, means and structures.

“Knowledge is power; it is in the hands of a few, who employ it to mislead the many, for their own selfish purposes of aggrandisement and appropriation. What if it were in the hands of a few who should employ it to lead the many? What if it were universal, and the multitude were enlightened? No. The many must be always in leading-strings; but let them have wise and honest conductors.”

Of course, the spreading Enlightenment triggered much larger and less controlled revolution ultimately than such organizations could actually manage. But, for those interested in such things as I am, there is plenty of material like this in the rest of the work to find this an amusing and enjoyable experience.

I picked up the free version of Thomas Love Peacock’s Nightmare Abbey, so I didn’t get the advantage of reading a critical essay about the allegorical nature of the characters. You should get a critical edition, or do some reading online, to get the full flavour of the biting satire and commentary.

I made 180 highlights and submitted only 15 corrections, mostly formatting issues.