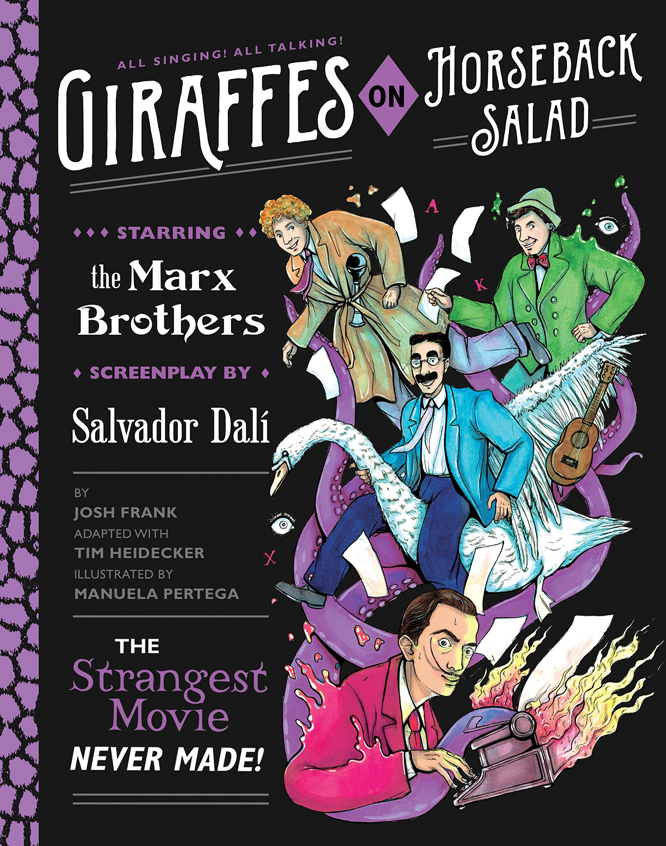 As an admirer of both the Marx Brothers and Salvador Dalí (and who isn’t?) I was surprised that I had never heard of their abortive Hollywood film project Giraffes on Horseback Salad until finding this book, which resurrects and fulfills it in the form of a graphic novel. In the “unmade movies” department of my cultural awareness, it now has a roost next to the documentary Jodorowsky’s Dune, which also involves Dalí, strangely enough.

Josh Frank is responsible for the research and reconstruction of the film from the preliminary script, studio pitch, and notes by Dalí, and he also supplies most of the front matter and end matter with notes on his process, history of the project, Dalí’s relevant biography, and related speculation. There is also a note from comedian Tim Heidecker, who helped to flesh out the reconstructed feature, and a short essay on “Dalí and Harpo” by Bill Marx, Harpo’s son.

The artist for the central graphic novel is Manuela Pertega. Her drawings are expressive and effective, and I was especially pleased by the large full-page panels and two-page spreads depicting irruptions of the surreal. Her ability to represent the Marx Brothers as comics characters unfortunately falls well short of the lofty standard set by Dave Sim in Cerebus, but is nevertheless a reasonable success. Happily, she is in no way constrained by cinematic feasibility of the 1930s. It would be a treat to see a short based on her visual imagination in one of the more extreme scenes, now that digital effects make nearly any concept realizable on the screen.

Dalí’s “film” tells the story of Jimmy, an expatriate Spanish aristocrat in the US, who is torn between the forces of mundane power and transformative dream, represented in the persons of his fiancée Linda and the mysterious Woman Surreal, respectively. It includes several musical numbers, designed after the American stage and cinematic tradition to be easily abstracted from their narrative context. Although there is no musical scoring in the book, the verses are hypothetically realized with never-written tunes by Cole Porter.

I enjoyed this book for its historical perspectives and creative efforts.