Recent article about the Fri 13th opening of “Windows to the Sacred” exhibition which features work by Aleister Crowley and Rosaleen Norton at Buratti Fine Art in North Fremantle, Western Australia at “Witch and wicked” finally reveals more information about the exhibition in Australia around which I’d previously posted at “The Nightmare Paintings“. 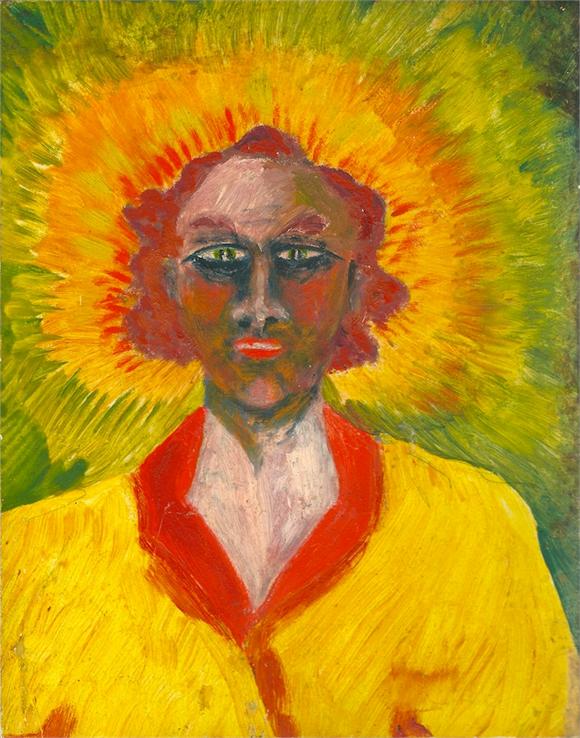 The Sun (Study for Tarot, self-portrait) by Aleister Crowley

“Gallery director Robert Buratti says esoteric art is focused on the search for hidden knowledge of ourselves and our place in the universe.

‘The work is heavily influenced by symbolism and surrealism,’ Mr Buratti says.

‘It’s been an interest of mine kicked off by the exhibitions by Josephin Peladan in Paris in the late 1800s at the Salon de la Rose + Croix. While the Paris Salon was showing still life and landscapes, they were more showing works about spirituality.

‘Gauguin had a lot to do with symbolism coming to the forefront, so I’ve always thought it would be lovely to do a group show on it, but you don’t often get access to that sort of work.’

Buratti sought out the curators and researchers behind the highly successful 2008 Traces du Sacre at the Pompidou Centre in Paris and the satellite showing of The Nightmare Paintings by Aleister Crowley (1875-1947) at the Palais de Tokyo.

All of which landed Buratti in a huge bank vault beneath central Paris to view Crowley’s works. ‘It was like a massive prison, with steel balconies on each level and little doors full of boxes. There was an amazing amount of security. After going through several doors where two people unlocked them simultaneously, you finally get to the main room where some of the great art of Europe is locked away – literally centuries of collecting by private buyers rarely seeing the light of day.’

Dubbed by the British press as the wickedest man in the world, it’s the first showing of Crowley’s work in Australia. He turned his back on his Christian upbringing, and his mother, who called him ‘The Beast’. A drug user of wide range from opium to ether, he was also a heroin addict.

Described as a colourful occultist, mystic, magician and poet who courted the press, Crowley devised his own philosophy and started a commune in Sicily in 1920, until Mussolini threw him out of the country in 1923.

Buratti says during this time in Sicily Crowley painted feverishly. ‘The works in the show are from that period and were on display in the Paris exhibition.’

Across the world in Sydney, Rosaleen Norton (1917-1979), was influenced by Crowley’s writing. Called the Witch of Kings Cross by the tabloids, and devoted to the god, Pan, she has the dubious honour of having her work seized and destroyed by the Australian government. Her life was punctuated by high-profile legal cases for obscenity but in later life she became a tourist attraction.

Despite the controversial lives of Crowley and Norton, their small representation in the exhibition seems mild.

Back to the present, Canberra-based Kim Nelson and indigenous artist Danie Mellor provide a different slant together with works by James Gleeson (1915-2008), considered the father of surrealism in Australia.

Sydney-based Barry William Hale is also included. Better known internationally, his work across many media is influenced by everything from sorcery to the paper-cut tradition of indigenous Mexicans.

Hale will perform at the Revelation Perth International Film Festival with the group Noko in its WA premiere of a combination of projected images, experimental music and interpretation of magic.

The affable Hale says his adoptive father was an exporter who came home with exotic artefacts, photos and footage from places such as the highlands of Papua New Guinea, fostering an early fascination for other cultures. His biological parents, both artists, were pioneers of alternative living at Nimbin.

‘I’m always an aesthetic sponge to different expressions of human spirituality and drawn to uncovering different esoteric practices,’ he says.

Buratti says the exhibition is about doing something different but also linking into ideas happening around the world.

‘There’s been renewed interest in esoteric art from curators around the world. You don’t want to get too weird with it because you want to be comfortable with the content you’re putting in front of people, and you don’t want people to misunderstand what you’re about,’ he says.

‘It’s always difficult to tell how people will respond but the interest has been massive.'” [via] 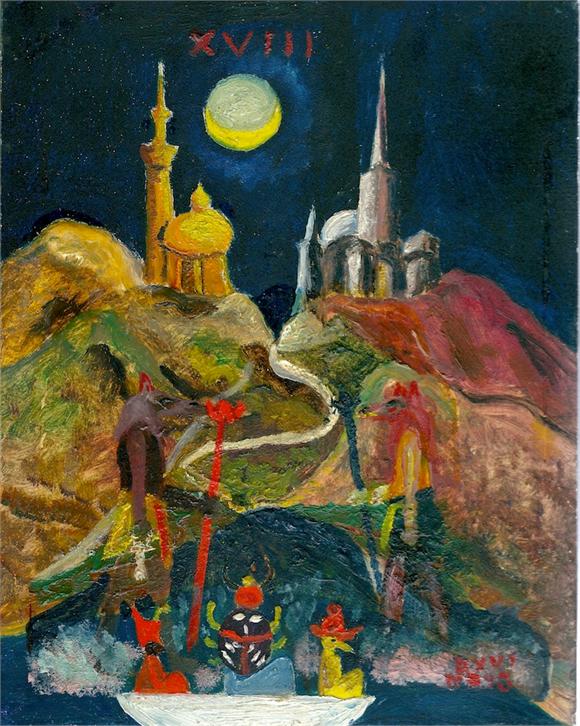 The Moon (Study for Tarot) by Aleister Crowley

Update 12jul2012 @ 5:12pm – Now that I know the actual name of the exhibit, I’m finding information about this show all over the place. For example there’s a note about “Windows on the Sacred” on the front page of Fulgur Limited, LAShTal reported on this last month, and there appears to have been a very informative email newsletter that you can gander at online about this as well. 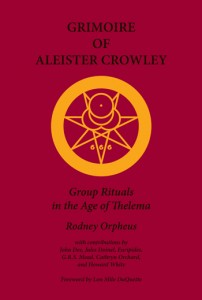 Apparently pre-orders will be open tomorrow for Grimoire of Aleister Crowley: Group Rituals in the Age of Thelema, a new work by Rodney Orpheus with contributions from others; the first publication from Abrahadabra Press.

“The culmination of years of research and study, this new compilation of Thelemic group rituals by Rodney Orpheus is a must-buy for every serious modern magician. Pre-order it directly from Abrahadabra Press from August 1!”

“Group ritual has been a cornerstone of spiritual practice since time immemorial, yet its history and importance have often been overlooked by occultists of the modern age. This book is the first comprehensive presentation of group-oriented rites for modern magicians inspired by the works of Aleister Crowley. It contains rituals written by Crowley for his own magic circles, many of them unpublished during his lifetime; plus rare ancient texts that were Crowley’s own inspiration in turn.

The rituals are newly edited and explained by Rodney Orpheus who brings to this volume decades of experience in performing and teaching Aleister Crowley’s rituals within Crowley’s magical order Ordo Templi Orientis. He introduces each ritual with a clear overview, setting each in its historical context and explaining its function and mode of operation; followed by detailed notes on setting and performance of each one.

Whether absolute beginner or seasoned expert, magicians of all paths will find this volume to be an eminently workable and extremely powerful grimoire spanning centuries from ancient Mithraic and Bacchanalian rites, Goetia, and Gnosticism, right up to present day Crowleyan invocations and sexual magick.”

Pre-ordering has begun. You can check that out over at Abrahadabra:

“We are now taking pre-orders for this book, which is due to be published on August 12, 2011. Please note that orders placed before that date will not be shipped until some time after August 12! The first 100 pre-orders will qualify for a set of small signed art cards featuring illustrations from the book by Cathryn Orchard.”