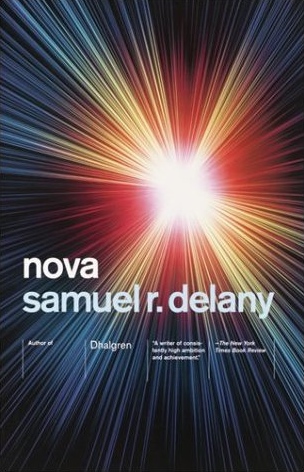 Delany’s Nova is nearly exactly as old as me (written in 1966-7, first published in August 1968), and I am stunned at how well it has aged. Although it is a short novel, it is a sprawling space opera set in the 32nd century, and its optimistic forecast for a technologically accomplished galactic humanity is still one that seems believable today (as long as one can imagine our civilization surviving its several impending comeuppances). This is a book that’s been on my radar as a vague “to be read someday” for many, many years. In a way, I’m glad I didn’t read it any earlier, because it’s all the more impressive for its sustained integrity.

There’s no way that anyone would have considered making this a movie when it was published in the 1960s. But in the 21st century we have both the effects technology and the audience sophistication to make it worthwhile. The Wachowskis could totally pull it off. Still, Delany is resolutely literary in this book, with the character Katin serving as a metafictionally reflexive anchor: he aspires to write a novel, an anachronistic impossibility in his star-spanning culture.

The story has a fine central ensemble of characters in the crew of the starship Roc: gypsy musician, moonish intellectual, soft-spoken cartomancer, scarred quester, and so on. The villains are detestable enough, although they have their justifications, and the heroes are interestingly flawed. There are exotic and inspiring landscapes, architecture, and space vistas. It’s got grittiness and high sentiment, social philosophy and action-adventure. There’s even a metafictional brag that it contains some sort of “mystical symbolism.” In any case, it’s a worthwhile read. [via]