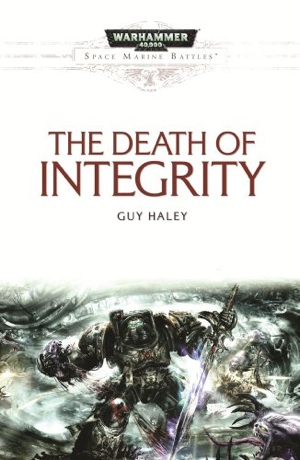 This novel is pretty good to read, if you’re looking to sympathize with transhuman fascistic killers. Certainly, Warhammer 40,000 space marines are more interesting than their Star Wars “storm trooper” counterparts, and this may be a consequence of the marines’ origins in gaming. They are certainly characters in the game sense, if not always so strongly in the literary novel sense.

The central plot of Death of Integrity is the conquest of the eponymous “space hulk,” a moon-sized agglomeration of derelict ships, asteroids, and other debris, that has been drifting in and out of warp space for millennia. It therefore contains the basic scenario of the Space Hulk board game and its little cousin Space Hulk: Death Angel – The Card Game. The proximate foes in this book — as in the Space Hulk games — are the “genestealer xenos” (hive-social interstellar creatures reminiscent of the monsters in the Alien film franchise) that infest the derelict. But key complications arise from the involvement of the Imperial priesthood charged with maintaining and acquiring “archeotech.”

This particular book also highlights the cultural idiosyncrasies and differences between two space marine chapters: the Ultramarines and the Blood Drinkers. Each book chapter is headed with an insignia representing the marine chapter with which it is most concerned: the burst-haloed skull of the Ultramarines, or the blood-drop and cup of the Blood Drinkers. There is one passage at very nearly the center of the book that provides a neat liturgical comparison and contrast as the two chapters ceremonially prepare themselves for battle.

In Death of Integrity, even more than in the single other Warhammer 40,000 book I’ve read, women are thoroughly absent, and sex is never acknowledged as a conscious reality. Still, all of the far-future vampire imagery and the penetrative gore of the battles provides a sexual subtext that is all too obvious to an un-blinkered reader.

There are some basic editorial problems. A multi-paragraph passage occurs twice verbatim in the same chapter — I couldn’t figure out where it actually made more sense. There are some (rare) issues with subject-verb agreement and other scruples of English grammar.

Still, within the confines of a fairly limited plot scenario, the book did a good job of communicating the gist of its setting. Even though its scope and scale were more constrained than in The Blood Angels Omnibus, it gave a better sense of future-historical depth. The Empire in The Blood Angels Omnibus could almost have been a “peak” multi-national civilization of the classical world, while in Death of Integrity, it is much more implicitly clear (even before an antagonist’s climactic jeremiad to this effect) that the Empire is a superstition-riddled medieval degeneracy, something of a “space hulk” itself. [via] 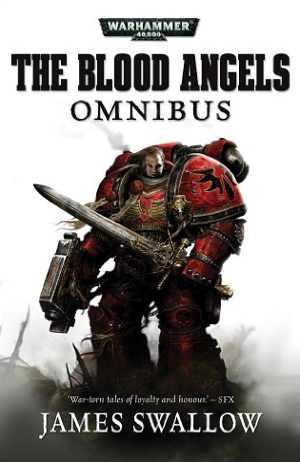 This omnibus of two novels and a short story is the first narrative fiction I’ve read in the Warhammer 40,000 setting, a far-future space fantasy milieu developed for various types of gaming: tabletop miniatures, roleplaying, and board games. I’ve been aware of it for a couple of decades, and I’ve always been impressed at how it leveraged the tropes and notions of its medieval-style older sibling Warhammer—a conspicuously unoriginal setting for epic fantasy and sword-and-sorcery game systems. My first actual gaming experience with WH40K has been the co-operative card game Space Hulk: Death Angel, a game with something of the atmosphere of the Aliens movie franchise. A cadre of “Space Marines” fight their way through swarms of killer aliens in an effort to explore a derelict starship. WH40K Space Marines are the bio-engineered, power-armored legions of the God-Emperor of mankind, and their role in the galactic “ecclesiarchy” makes them really seem like space Templars. In any case, the Death Angel game—which is quite good, by the way—draws its player characters from the Blood Angels Chapter of Space Marines, so I picked up James Swallows’ Blood Angels Omnibus with an interest in finding out more about these characters.

As it turned out, there was only a single character from the game (Lexicanium Calistarius) who appears in this book, and that mostly under a different name (Mephiston), since these stories take place some centuries after the Space Hulk adventure. Still, the stories communicated the general setting, as well as the particular notion of the “Death Company”: the squad composed of Blood Angels who have succumbed to their genetically-transmitted homicidal madness.

One annoying feature of the Warhammer 40K setting is the gramatically-hopeless dog Latin used to represent the “High Gothic” hieratic language of the Terran Empire. I also find the continued centrality of the human homeworld of Terra over a score of millennia to be a little hard to credit. Still, the easiest comparisons are probably to Dune and Star Wars, each of which has probably contributed some significant inspiration to the working out of this fictional universe. Conceptually, it is certainly a cut above Star Wars. The parallel to the mystical/psionic “Force” of the Jedi and Sith in these stories is directly bound up with the warping of space and extradimensionality that makes faster-than-light interstellar travel possible (again, compare Dune), and the warp is inherently “evil” in that it is inimical to the homeostasis of human societies and organisms. It is the home of daemon lords and their attendant Yog-Sothotheries, and their efforts to corrupt and mutate the Blood Angels are central to the narrative in this volume.

These stories are extremely violent, and the superhuman physiognomies of both Space Marines and the forces of Chaos sometimes incline the violence to the “comic book” sort, although the graphic descriptions of organic mayhem would never have passed the old “comics code.” Becoming a Space Marine involves radical surgeries and genetic treatments that add new organs, and evidently, subtract some old ones: there is not an iota of sexual consciousness evident in any of the Blood Angels. This feature might be a plus in peddling books like this to an adolescent male gamer crowd, who might seek refuge from their hormones in tales of violent adventure. There are few women in the book (only two with names, I believe), and they are all cast as victims of the principal villain. There is, however, symbolic sex aplenty for the Blood Angels and their fans: a magic spear transmits the ancient power of their Primarch Sanguinius, and a Red Grail is the chief devotional artifact of their cult.

In addition to the three pieces of fiction, there are two further documents bound into this omnibus: the author’s foreword, reflecting on how he came to write the stories, and an appended “minipedia” extracted from the author’s original working notes. The latter should be avoided by those reading the book for the first time, as it is mostly stuffed with spoilers. [via]