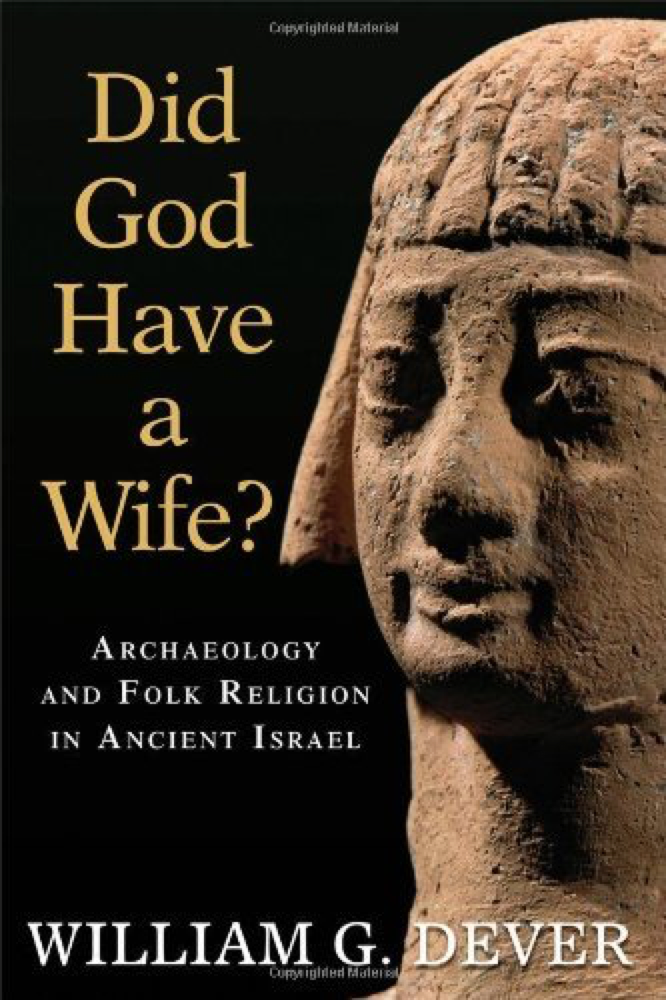 Of the various books I have now read about Asherah and ancient Hebrew religion, William Dever’s Did God Have a Wife? is the most recent, the most comprehensive, and the most confrontational. The author addresses the book to “ordinary people” and wants it to be “accessible to nonspecialists” (ix, xii), but it is not a light, popularizing account. It is a thorough argument with careful attention to method, reaching across multiple disciplines despite its principal grounding in archaeology. It does not have a full footnoted apparatus, but it includes two significant survey/reviews of prior scholarship, a fifteen-page bibliography of “basic sources,” and many other references to Dever’s predecessors and peers in researching the topic. There is a subject matter index and an index by scripture references.

The emphasis in this volume is on lived, popular religion in ancient Palestine, as contrasted with the ideal of the elite minority represented in the Hebrew Bible. Dever is of course at odds with those whose biblically-based presuppositions make Yahwist monotheism the normative Hebrew religion from “the time of Moses” (or Abraham!) onward. But he is also arguing against a form of “revisionist” biblical scholarship that reduces the entire text to etiological myths retrojected from the sixth century b.c.e. or later. His position is that there is historical value in the biblical narratives, when they are used as one supplementary source (among others) to contextualize the archaeological record, and subjected to a careful hermeneutic that takes into account their origins and the partisan interests of their authors/redactors.

Dever shows little if any sympathy for theology, repeatedly observing how theological interests have worked to mystify and obscure past realities. He does have a concern for the religious vitality of “symbol, ritual and myth” (61). Accordingly, he is dismissive of academic attempts to dilute the evidence for popular worship of the goddess Asherah with concepts like “hypostasis of the feminine aspect of Yahweh” and “symbolic furniture.” (“Symbolic of what?” he demands.) He is also forthright about the inextricability of magic from popular religion in antiquity (125-34).

The archaeological materials covered demonstrate, as Dever says more than once, that the popular religion of the monarchical period of Israelite history was in fact characterized by just those elements that the Yahwist reformers of the Hebrew Bible itemized for suppression: magic, “high places,” incense burned to gods other than Yahweh, recognition of Asherah in the temple, standing stones, veneration of the sun and stars, unauthorized divination, and so forth. The Deuteronomistic reformers were clear about their targets, and they were “right” inasmuch as the reforms failed (212). This elite minority could neither coerce nor persuade the larger population to forgo their immemorial customs.

Dever then tackles the task of supplying a historical narrative that accounts for the rise and eventual success of Hebrew monotheism. I found this late section of the book quite persuasive, and the element that was most eye-opening for me was the role of the construction of Solomon’s temple in motivating the invention of an exclusive Yahwism. The nationalist project of a splendid, Phoenician-style temple needed to be justified, given its costly imposition on the country. (Rich irony: Hebrew slaves building the pyramids in Egypt are bunk, but “conscripted labor” to build the Jerusalem temple was for real.)

Bringing his story forward toward the present, Dever even treats the medieval reinvention of Asherah (understood as a feminine consort/counterpart to the Jewish God) in kabbalistic Shekinah mysticism. His closing sections discuss archaeological, biblical studies, feminist, multicultural, and popular consequences of the historical conclusions that Dever offers about Asherah’s reality as an ancient goddess. As a non-theist convert to Reform Judaism (from a “fire-breathing fundamentalist” Protestant background, by way of an academic and archaeological odyssey, x-xi) he is not making any personal pleas for a revival of Asherah worship as such. But he does advance an appeal for understanding extended across the divisions of history, social class, gender, and religions. [via]