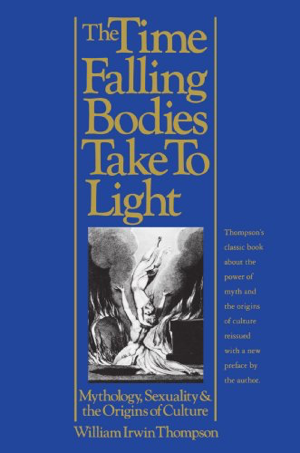 In The Time Falling Bodies Take to Light, William Irwin Thompson denounces sociobiological explanations of the development of human culture, and espouses an alternative based to no small degree in yogic mysticism and mythological allegories of sexual and celestial processes. Ultimately, his sweeping account of anthropogenesis resolves into a meta-historical picture provocatively similar to the “aeons” of Isis, Osiris, and Horus proposed by Aleister Crowley, complete with allusions to the precession of the equinoxes. Like Crowley, he sees the 20th century as the possible inception of a new dark age, as well as an opening to new spiritual potentials best understood in terms of human sexuality.

Thompson is especially critical of the 20th-century development of Western educational institutions, which he indicts with succumbing to “the politics of social scientists. In the new society we have created through mass education, we have tried to force the humanists in the universities to become social scientists, and in the extreme patterns of narrow specialization we grant PhDs in the social sciences to some people who have read almost exclusively articles in specialized journals and predigested textbooks prepared especially for the enormous classes favored by the bureaucracies of the edubusiness. Equipped with worthless degrees, these social scientists then become the expert consultants to government and the educators of the new generation” (52). Written by an academic who had held positions at MIT and other universities, Thompson’s jeremiad was accurate and should have left a mark, but we are now another generation further along on the same trajectory.

Thompson’s chapters on “The Transformations of Prehistory” are a lucid and provocative exploration of a posited matrifocal culture of the neolithic era. His chief archaeological referents for this purpose are the Lascaux caves and Çatal Hüyük. Reconsidering this material today demands—and benefits from—comparison of recently-discovered Indonesian cave art. But more recent and thorough work on Çatal Hüyük casts doubt on the goddess-worship explanations offered by the original excavator Mellart and cited by Thompson.

The chapters on “Western Civilization and the Displacement of the Feminine” provide analyses of actual myths, Sumerian and Egyptian. For the former, the focus is Gilgamesh, for the latter it is Isis and Osiris. Both are taken as illustrative of a transition from the religion of the mother to that of the father. In the Egyptian discussion especially, Thompson concerns himself with the matter of esoteric initiation, and he deploys some jargon of decidedly Theosophical provenance (e.g. the “causal plane” distinguished from the “astral”) without ever citing the sources of his own initiated knowledge.

The short final chapter on “The Myth Beyond History” supplies Thompson’s analysis of Christianity and its planned obsolescence, along with an attempt at contemporary prophecy. I read this book when it was 33 years old, and I think it’s quite deserving of being lifted on a pole or standard, “that every one that is bitten, when he looketh upon it, shall live.” [via]